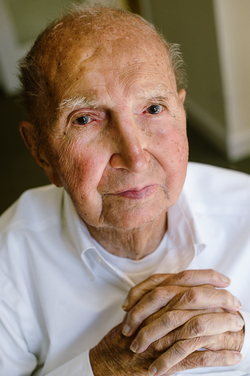 Harvey J. Winter, 99, who held positions at the U.S. National Park Service, U.S. National Archives, and U.S. Department of State, died December 22, 2014, in Easton, MD. Mr. Winter was born in New Albion, NY on April 6, 1915. He attended grammar and high school in Buffalo, NY and graduated Phi Beta Kappa and Magna Cum Laude from the University of Buffalo in 1939.He was a teaching fellow at George Washington University prior to his government service.
While at the State Department, he represented the United States at international conferences on the Universal Copyright Convention and the Patent Cooperation Treaty and at other meetings on issues of intellectual property, industrial property, communications satellites, plant protection, and audiovisual works. His positions at the State Department included being Chief of the International Business Practices Division and of the Business Practices Division, Director of the Office of Business Protection and of the Office of Business Practices, and Director of the Office of Intellectual Property and Competition.
Mr. Winter was a recipient of four Superior Honor Awards from the State Department in 1971, ‘75, ‘89, and ‘92 as well as a 50 year Service Award in 1990. In 1982 he received the Jefferson Medal from the N.J. Patent Law Association and in 1989 he was an honoree of the Copyright Society U.S.A.
Virginia Shaw Winter, his wife, and Jeffrey S. Winter, Sr., his son, predeceased him. He is survived by his two grandchildren, Amanda C. Chandler of Alexandria, VA and Jeffrey S. Winter, Jr. of Arlington, VA; three great grandchildren, Griffin Winter, Hayley Winter, and Claire Chandler; and Bobbie M. Rideout, his former daughter-in-law.
Services for Mr. Winter will be held on January 10th at 11:00 a.m. at Grace Episcopal Church 3601 Russell Road, Alexandria, VA. 22305.
Arrangements entrusted to Newcomb and Collins Funeral Home, P.A., Cambridge, MD
To share memories and send online condolences please visit www.newcombcollins.com

Saturday January 10, 2015 , 11:00 a.m at Grace Episcopal Church Share your thoughts and memories in the guestbook.

To order memorial trees or send flowers to the family in memory of Harvey Winter, please visit our flower store.
Send a Sympathy Card