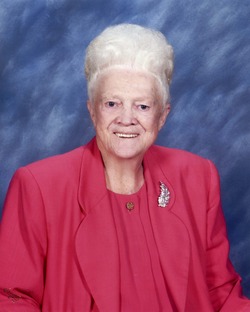 Born on February 13, 1928 in Ashland, Kentucky, she was the daughter of the late Rev. Benjamin Harrison Lucas and Jessie Mae Farrow Lucas. Her father was the Pastor of the Cambridge Pilgram Holiness Church (now the Cambridge Wesleyan Church) from 1946 to 1948 and helped re-build the Church from the great fire of that time.

On June 26, 1947 she married E. Newton Ruark, they lived most of their married life in Crocheron, Md. They enjoyed over 43 years of marriage before his passing on October 23, 1990.

Jenny V. attended White Haven United Methodist Church in Church Creek and the Cambridge Wesleyan Church until her health no longer permitted. She always enjoyed being in church and especially loved listening to gospel music.

During her working years Miss Jenny V worked at Western Publishing during the winter season where she cut pictures for school yearbooks. She worked with her husband the remainder of the year proudly working on the water closely with him and tended to the soft crab operations that they had. At one time she had her own boat and would nipper (catching oysters) with smaller tongs by herself along the shoreline. She greatly enjoyed working with her husband on the water especially pound net fishing and crabbing. Since she was raised in the mountains of Kentucky and Tennessee she had never seen a large body of water until she moved to the Eastern Shore so she learned a lot about the life of a waterman on the Chesapeake Bay.

Gardening was something she truly enjoyed when she moved to Cambridge in 1991. She had over 90 rose bushes and loved spending time feeding them and caring for them. Crocheting was also a favorite hobby and she made some beautiful blankets. Her favorite holiday was Christmas and she loved decorating for the holiday. Until recently she would spend several months in Florida in the winter at Hobe Sound Bible School and Church and loved being there on campus with all her friends and many of her family.

Preceding her in death besides her parents and husband was a son Edward L. Ruark, a daughter Evon Mae Ruark (infant), two sisters Marsella Martin and Alberta Snow; three brothers The Rev. Ellwood Lucas, The Rev. Paul Lucas and Gordon Lucas, and several nieces and nephews.

The family will receive friends on Thursday evening October 13, 2016 from 6 to 8 p.m. at Newcomb and Collins Funeral Home, P.A., Cambridge.

Funeral services will be held Friday, October 14, 2016 at Cambridge Wesleyan Church beginning 12:00 noon.. The family will also receive friends the hour prior to the service. Officiating at the service will be Pastor Jack Diehl and Rev. David J. Wooten, Jr. Burial will follow at the Maryland Veterans Cemetery in Hurlock.

To order memorial trees or send flowers to the family in memory of Jenny Ruark, please visit our flower store.
Send a Sympathy Card