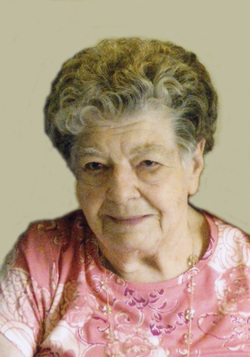 
Arie Naomi Lewis (90), of Wingate, Maryland passed away on Monday, April 6, 2015, at Genesis Seaford Center. She was Born in Wingate, Maryland, on April 19, 1924, daughter of the late Willie Arie (Woodland) and Lasbury Parks.

She married her childhood sweetheart, Osylee M. Lewis during World War ll and together raised their children, James Osylee Lewis and Anna Arlene Lewis. She partnered with Osylee in their crabbing, oystering, and crabpot - making businesses. They were active members of the PTA while their children were in school. Naomi loved to cook and bake for her family and friends as well as church and firehouse activities. She was passionate about providing meals to those in need during holidays and illness. Naomi was a creative person who enjoyed making floral arrangements for the church and crafting brooches from recycled eyeglass lenses and sharing them with others. She was a member of Wingate United Methodist Church, United Methodist Women, Lakes and Straits Fire Department Ladies Auxiliary and a founding member of the Riverside Homemakers Club. She cherished time spent with family and friends.

In 2011 Mr. and Mrs. Lewis made their home at the Seaford Center where they received excellent care. The family wishes to extend their heartfelt thanks for the compassionate and personalized care provided by the staff at the Center.

Preceding her in death were her parents, beloved husband of 68 years, sister Mary Dean Jaglowski and brothers Arthur, Lasbury and Edward Parks.

Family and friends are invited to attend a visitation on Thursday, April 9, 2015 at 9:30 a.m. followed by services at 10:30 a.m. at the Newcomb and Collins Funeral Home, P.A., 308 High St., Cambridge, Maryland. The Rev. Mary Ann Farnell and Rev. David Kreek will be officiating. Interment will follow at Maryland Eastern Shore Veterans Cemetery- Hurlock MD.

To order memorial trees or send flowers to the family in memory of A. Lewis, please visit our flower store.
Send a Sympathy Card