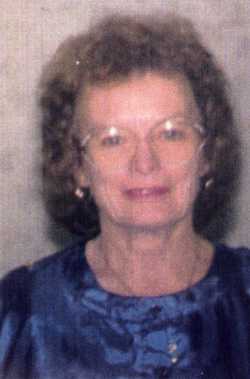 Born on November 6, 1926 in Woodward, Oklahoma, she was the daughter of the late John Luther Scott and Alva Lucille Berry Scott.

In 1945 “Petie” married Ronald R. McGlaughlin who was serving in the military at that time. Upon his honorable discharge, they moved to Hoopers Island, MD in 1947. Although their marriage ended in divorce, they parented two sons and remained friends throughout their lives.

Petie moved to Texas and had worked for the Corpus Christi Public Works. On September 26, 1994 she married Kenneth A. Rickard, a long time Corpus Christ resident and avid horseman where he had a ranch in Colorado. Petie and Kenneth moved to Cambridge to be closer to her sons. Kenneth died in Cambridge on August 19, 2009.

While residing in Corpus Christi, Petie was a member of the Optimist Club. She loved to dance and sew.

While residing here in Cambridge, she was a member of the Countryside Christian Church.

Preceding her in death besides her parents was her son R. Michael “Mike” McGlaughlin.

A memorial service will be held on Thursday , March 15, 2012 beginning 2 pm at the Newcomb and Collins Funeral Home, P.A. Cambridge.
Friends will be received one hour prior to service.
Officiating will be Rev. Delmer Willey and Preacher Phil Sutton.

To order memorial trees or send flowers to the family in memory of Alva Rickard, please visit our flower store.
Send a Sympathy Card