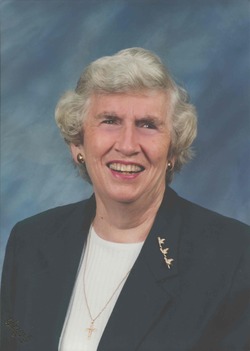 
Augusta Boggs Radcliffe., a long time volunteer and member of St. Mary's Refuge of Sinners Roman Catholic Church in Cambridge, died at her home in Cambridge. She was 89.
Born in Baltimore, Mrs. Radcliffe, known to most as “Gussie”, was the daughter of William Aloysius Boggs and Augusta Vickery Heiskell Boggs.
Mrs. Radcliffe was raised on Elmwood Road in Roland Park and graduated high school from Notre Dame of Maryland in 1942. After attending Notre Dame College in Baltimore for one year, she went to work briefly as a medical secretary.
In 1948 she married George Marriott Radcliffe, who was to be her husband for 60 years. He preceded her in death, passing in 2009. They lived in Baltimore for 40 years, raising 4 children, and then moved to old family home Spocott in Cambridge, MD. In 2005 she and George moved to the Londonderry Retirement Community in Easton, MD, and upon George’s death in 2009 moved in with her son George and his wife Jackie.
Augusta was an active member of St. Mary's Refuge of Sinners Roman Catholic Church in Cambridge, where she volunteered her time often. She also was a volunteer at Dorchester General Hospital and with Meals on Wheels.
Surviving is her son George Marriott Radcliffe, Jr. and daughter-in-law Jacquelyn McCann Radcliffe; two grandsons, Gregory McCann Radcliffe and his wife Melissa of Cambridge, MD and John Scott Radcliffe and his wife Meghan of Veedersburg, IN; and four great-grandchildren. A daughter, Mary McKim Radcliffe, died in 1976. Another daughter, Augusta H. Radcliffe, and a son, William B. Radcliffe, were killed in an automobile accident in 1982. She was also preceded in death by her grandson Andrew McKim Radcliffe in 2002. Also surviving are 2 sisters, Edith Boggs Brooks of Timonium, MD and Mary Graham Boggs Doub of Keadysville, MD. She was preceded in death by another sister, Grace Boggs Hartman in 2010.
A Mass of Christian Burial will be held at 10 a.m. on Thursday, January 16, 2014 at The Shrine of the Sacred Heart, 5800 Smith Avenue, Baltimore, Maryland. Committal service will follow at 11:30 a.m. at Druid Ridge Cemetery, 7900 Park Heights Ave., Pikesville, MD. The family will receive friends on Wednesday evening, January 15, from 6 till 8 p.m. at Newcomb and Collins Funeral Home, P.A., 308 High Street, Cambridge
In lieu of flowers, please make any donations to Coastal Hospice, P.O. Box 1733, Salisbury, MD 21802- 1733 or Pleasant Day Adult Day Care Center, 2474 Cambridge Beltway, Cambridge, MD 21613.
To send online condolences to the family please visit www.newcombcollins.com

To order memorial trees or send flowers to the family in memory of Augusta Radcliffe, please visit our flower store.