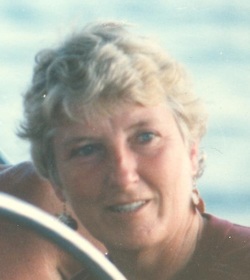 
Barbara Roetzel Williams, 80, died peacefully at home in Cambridge, MD, on September 26, surrounded by her loved ones. Born in Cresson, PA, her family moved to Akron, Ohio where she spent her childhood and early years, attending St. Vincent High School where she was elected homecoming queen in her senior year. She continued on to Akron University, where she joined the Delta Gamma sorority and earned a Bachelor’s degree in Education. In 1955 Barbara married Edgar Morgan Williams, also of Akron, and taught for several years in Akron/Cleveland Public Schools before moving to Falls Church, VA. She and her family also lived in Hawaii for several years and were longtime residents of Bethesda, MD, before moving to Cambridge, on Maryland's Eastern Shore.
Barbara was active most of her life. She loved horses and was an accomplished equestrian, who taught riding and exercised thoroughbreds at a local race track. She was an avid tennis player and loved sailing with her family on the Chesapeake Bay. Most of all, she enjoyed the summers she spent at the family compound on Roetzel Island in Ontario, Canada - in later years as the "Grande Dame" of the family. In her second career (after teaching), she managed several branches of the Bank of Bethesda for many years. After retirement, she remained active through her involvement with the Cambridge Garden Club, the Women's Club, the Cambridge Yacht Club, the Dorchester County Historical Society, and the Salvation Army Advisory Board.
She leaves behind her husband Edgar Williams; brother, Bernard "Nick" Roetzel; daughters Morgan Mann, Carrie Cassidy, and Elizabeth Williams; son Bruce Williams, and son-in-law Chuck Woodworth; grandchildren Eilis Cassidy and Grace Mann, great grand-daughter Aoivain Cassidy-Paulette and many well-loved nephews and nieces and their families.
Services for Barbara will be held 11:00 a.m. Monday, October 1st, at St Mary's Refuge of Sinners, located at 1515 Glasgow Street, in Cambridge, MD. Officiating will be Father Bruce Byrolly. Following the service, the family invites friends to a celebration of Barbara's life at her home.


To order memorial trees or send flowers to the family in memory of Barbara Williams, please visit our flower store.