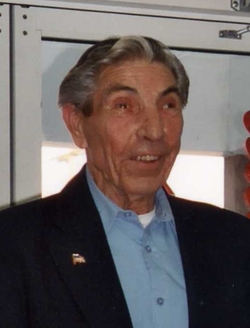 
Bernard Paul Furbush, 85, of Vienna passed away Saturday, August 13, 2016 at his home with his wife by his side. He had been in failing health for the past few years.
Born March 17, 1931 in Rock Point, Southern Maryland he was the last living child of twelve children born to Mary Blanch Davis and John William Furbush.
Paul enlisted in the US Army in 1948. He served in the Korean War with the 809th Army Engineers Aviation Patallion before being honorably discharged in 1951.
After returning from service, Furbush & Robbins Builders was formed in 1951. The business operated until 1955 when Paul became a self employed carpenter. He continued the trade until 1969 when he joined the Department of Natural Resources. He loved every minute of his job. For 25 years his summers were spent fighting the wild fires in the western states. At the time of his retirement he was Supervisor of Bayshore Fire Control Unit at Church Creek. Many years later, Paul was still fondly recognized as "Smokey the Bear".
Paul loved his country, his state and all people. He was proud to have served them. For years he was involved with the Boy Scouts and youth ice hockey. Paul had great compassion for animals. He had a Collie dog kennel for many years.
Paul was a lifetime member of the VFW #7460 and the American Legion Post #91.
Paul married Carole Travers in 2005. They enjoyed traveling until his health began to decline. He greatly enjoyed sharing his stories of his travels around the world to young and old alike.
Surviving is his wife Carole; grandsons Steve and Mike Furbush and two great grandsons.
Preceding him in death are his two sons. Robert (Rocky) passed away in 2010 and Steve in 2014.
A funeral service will be held Tuesday, August 16, 2016 beginning 12:30 pm at Newcomb and Collins Funeral Home, P.A., Cambridge. Officiating will be Rev. A. Delmer Willey, Jr. assisted by Pastor Milbourne Adkins. A viewing will be held two hours prior to the service. Interment will follow at Maryland Eastern Shore Veterans Cemetery, Hurlock with military honors.
Serving as pallbearers will be Steve Furbush, Mike Furbush, Joe Retalick, Ethraim Diefenderfer, Brian Sturgis and Ron Hughes.
In lieu of flowers memorial donations can be made to Coastal Hospice, c/o Maureen McNeil, 2604 Old Ocean City Road, Salisbury, MD 21804 or VFW Post #7460, 115 Sandy Hill Road, Cambridge, MD 21613.
To send online condolences to the family, please visit www.newcombcollins.com

To order memorial trees or send flowers to the family in memory of Bernard Furbush, please visit our flower store.