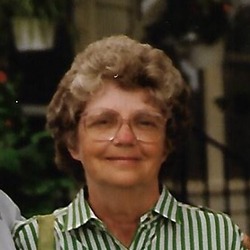 
Betty Ruth Dean, 88, of Madison, Maryland formerly of Hoopers Island, Maryland passed away on November 22, 2017 at UMSMC at Dorchester. Born March 23, 1929 at Drawbridge, Maryland, she was the third daughter of the late F. Myles Lankford and Helen Marshall Lankford.

Betty attended school in Vienna, Maryland. On December 6, 1963 she married Brice Dean who preceded her in death in 2000. She was proud to be employed for many years as a waitress for restaurants in Cambridge, Maryland, especially the Old High Spot Restaurant. After moving to Hoopers Island in 1965 Betty and her husband Brice made crab pots for many local watermen.

Betty was well known locally for her gifted talent in crocheting and needle work. She was very interested in her family’s heritage. Attending Delmarva Community Services and playing bingo with The Old Timer’s at St John’s Church Golden Hill, Maryland were her greatest pleasures.

In 2014 illness led Betty to live with her sister, Gloria and brother in-law Phillip (Boy) Frazier in Madison, Maryland.

To order memorial trees or send flowers to the family in memory of Betty Dean, please visit our flower store.
Send a Sympathy Card