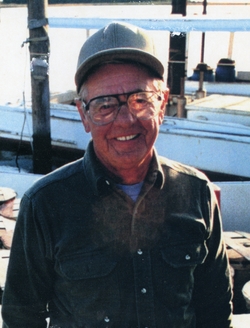 
Captain Joseph W. Hughes, 84, of Cambridge passed away Monday, April 6, 2015 at his home.
Born February 14, 1931 in Andrews, he was the son of the late Birtie McGlaughlin and Herman Hughes.
After attending the local schools Joe, as many of the locals at that time, became a waterman. For over 65 years he worked the water. Captain Joe established a legacy of one of the finest waterman of his era. Fondly referred to as “Joe Slick “ he was able to follow the crabs and fish. He could always find the spots where he was able to fill his boat with the days catch from crab potting or drift netting for rockfish. The other waterman would always envy Captain Joe’s capabilities.
Joe was a member of Cambridge Wesleyan Church and attended faithfully. He also was a member of the Cambridge Moose. After his “retirement” at age 80, Joe became a regular visitor to Hardee’s to socialize with others and became a member of the “Hardee’s Gang”. Joe loved his family and the grandchildren brought him special joy. “Big Pop”, as he was called by his great-grand daughter will be missed by all.
Surviving are his children Gary Hughes and wife Mary, Sandra Bland and husband Craig; grandchildren Cody Bland, K.C. Bland, Jr. and fiancé Samantha Kurtz; great-grandchild Madison Bland; his ex wife Gayle McDonald; his faithful dog “Slick” along with nieces and nephews.
Preceding him in death besides his parents is a son Joseph Hughes; first wife Delia Johnson Hughes; siblings Herbert Hughes, Sr. and wife Alice, Irene Gootee and husband Leonard; Irving Jones and wife Edna.
A viewing will be held Thursday evening, April 9, 2015 from 6:00 till 8:00 p.m. at Newcomb and Collins Funeral Home, P.a., Cambridge.
Funeral services will be held Friday, April 10, 2015 beginning 1:00 p.m at Cambridge Wesleyan Church with Pastor Jack Diehl officiating. The family will also receive friends the hour prior to the service.
Interment will follow at Dorchester Memorial Park.
Serving as pallbearers will be Cody Bland, K.C. Bland, Jr., Larry Gootee, Billy Gootee, Herbert Hughes, Jr. and Carson Windsor.
Honorary pallbearers will be Dave Nickerson, Thomas Collins, Bob Whaples and Warren Jones.
In lieu of flowers donations in memory of Captain Joe can be made to either Cambridge Wesleyan Church , 803 Race Street, Cambridge, MD 21613 or Dorchester Seafood Harvester Association, 5316 Spring Drive, Cambridge, MD 21613
To share memories or send online condolences please visit www.newcombcollins.com

To order memorial trees or send flowers to the family in memory of Captain Hughes, please visit our flower store.
Send a Sympathy Card