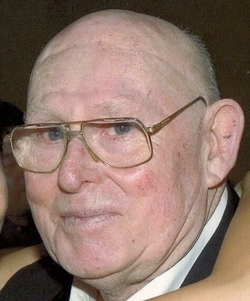 
Charles J. “Bud” Frampton, 76, of Cambridge, MD, formerly of Trappe, MD died March 22, 2012 at home.
Born in Brooklyn, NY on Sept. 3, 1935, he was the son of the late Charles Harold Frampton and Marguerite Amelia (Schmeelk) Frampton.
Mr. Frampton graduated from Hofstra University with a Bachelor’s degree in Engineering Science in 1964. He was employed at Grumman Aircraft Engineering Corporation and Vitro Laboratories before his employment at ARINC in Annapolis, MD. He retired in 1990.
Mr. Frampton served in the U.S. Navy from 1956 to 1960. His tour of duty was spent onboard the aircraft carriers U.S.S. Bennington and U.S.S. Midway. He received an Honorable Discharge in 1962.
He is survived by his wife of 36 years, Mary Elizabeth (Monahan) Frampton; daughter Suzi Elizabeth Masten, son-in-law Aaron Masten, and granddaughters Leah and Lucy Masten of Virginia. He is also survived by a cousin Gail Bostic of New Hampshire and her husband Brian.
Pallbearers will be Aaron Masten, James Thomas, David Lewis, David Woodward, Mark Monahan and Christian Barton.
Friends will be received at Newcomb and Collins Funeral Home P.A., in Cambridge, MD on March 26, 2012 from 10 til 11 a.m. Funeral services will follow with Darius Riley and Rebecca Redmer officiating. Interment will take place in Spedden - Seward Cemetery.
Memorials may be made to Dorchester General Hospital Foundation c/o Ida Baker, P.O. Box 439 Cambridge , MD. or a charity of your choice.

To order memorial trees or send flowers to the family in memory of Charles Frampton, please visit our flower store.
Send a Sympathy Card