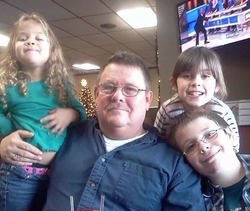 Charles A. "Pinky" Thomas, Sr., 55, of Cambridge, passed away Monday, December 8, 2014 at Med Star Washington Hospital Center, Washington, DC.
Born on August 19, 1959 in Maryland, he was a son of Gloria Mills Thomas and the late Sydney Thomas.
Having lived his entire life in the area, he attended local schools and was later employed for many years as a machinist at Airpax Electronics.
Pinky enjoyed life, he loved listening to Elvis Presley music, bowling, shooting a game of pool and camping. He was an avid Oriole and Redskins fan, but what he was better known for, was being a prankster. Playing jokes on people was a favorite pastime.
Surviving him besides his mother are two daughters Heather Kir and Heidi Thomas of Cambridge; a son Charles "CJ"Thomas, Jr. of East New Market; a sister Mary Jane Keene; five brothers William Thomas, Sr., Donald "Mac"Thomas, Rex Thomas, Sydney Thomas, Jr. and Ronnie Thomas; three grandchildren, Damian Thomas, Makayla Wilson and Kiani Cain who were the love of his life.
A funeral service will be held on Saturday, December 13, 2014 beginning 1 p.m. at Newcomb and Collins Funeral Home, P.A, Cambridge. A visitation with family will be held the hour prior to service. Rev. Randall Blackmon will officiate. Interment will follow at Elliott's Island Cemetery, Vienna, MD
Serving as pallbearers will be Charles “CJ” Allan Thomas, Jr., O’Neil Insley, Benny Parks, Jim Newcomb, Ken Marshall and Rex Thomas.
To send online condolences to the family, please visit www.newcombcollins.com

To order memorial trees or send flowers to the family in memory of Charles Thomas, Sr, please visit our flower store.
Send a Sympathy Card