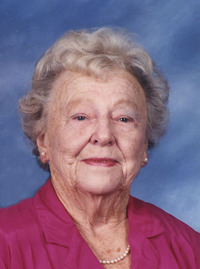 Born on December 20, 1917 near Vienna in Dorchester County, she was the daughter of the late George R. Fleming and Eva Gray Fleming. When she was five, the family moved to Poplar Farm in Bucktown where she lived until her marriage to Donald Spedden on October 15, 1940 thereafter residing in the Neck District until her recent death.

Mrs. Spedden worked for Dr. William Harvey Hanks from 1938 until his death in August of 1966. From July 1967 until she retired on April 30, 1981 she worked at the Eastern Shore State Hospital.

In 1998 the Spedden farm, Mill Creek Farm on Todd Point Road was awarded a Maryland Century Farm for being in the family for more than one hundred years.

During her retirement she loved to take care of her flowers especially tulips. She loved all animals especially her dog, Laddie, who was her constant companion on the farm. Mrs. Spedden was famous for her homemade lemon meringue pie that was a favorite of everyone who ate there. She loved her nieces and nephews and always enjoyed their visits.

After her husband’s death in January 3, 1999, Mrs. Spedden’s sister, Jean Hurley, who lived nearby, lovingly assumed the daily responsibility of providing whatever assistance was needed to maintain a high quality of life for Mrs. Spedden. From November 2003 until her death on Tuesday, December 16th, Mrs. Spedden resided in Salisbury at Atria, an assisted senior living facility where her niece Romona and her husband Clinton Bradway, Jr. and their son Jay continued to provide “Aunt Charlotte” with the love and care she needed and deserved.

Mrs. Spedden was a member of the Beckwith United Methodist Church.

Funeral services will be held at 1:00 p.m. on Friday, December 19th at Curran-Bromwell Funeral Home, P.A., where the family will receive friends one hour prior to the service. Officiating at the service will be The Rev. Pamela Bockart. Burial will follow at Spedden-Seward Cemetery, Hills Point, Cambridge, MD.

To order memorial trees or send flowers to the family in memory of CHARLOTTE SPEDDEN, please visit our flower store.
Send a Sympathy Card