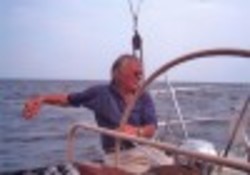 
OXFORD - Constantine G. "Gus" Koste Jr., 71, passed away at his home on Thursday, Oct. 25, 2012, after a courageous battle with cancer.
Gus was born at home in Denton on April 20, 1941, to Bessie and Constantine Geo Koste. He attended school in Caroline County, graduating from Mercersburg Academy in 1959. He attended Franklin & Marshall until 1962, when he was involved in an automobile accident. After spending months recovering in a hospital, he was finally able to complete his college studies at the University of Maryland.

After college, Gus began his career working for the Navy Department in their protein enzyme research. Missing the Eastern Shore of Maryland, he moved to Easton and began working at the Oxford Lab.
Ready for a career change, he joined R. Fox Inc., helping expand the women's clothing retail business to 14 stores from Easton to Florida. He and Ronnie Fox partnered to open the Court Street Pub in the mid-'70s. He was proud to be a part of the first sit-down bar/restaurant in Talbot County.
He joined forces with many others to open additional establishments, including Bullbrier's Saloon in 1991 and Schooner's Llanding in 1994.
In 1997, after years in the restaurant and bar business, Gus focused on his food brokerage businesses, Tidewater Marketing and Exclusive Sales. He worked closely with Frank Saunders in recent years at his office in Oxford. The office on Pier Street became a gathering place for Gus's many friends. The group affectionately became known as the "Boys Club."
Gus's great love was sailing, and he began his illustrious sailing career in one design sailboats (Penguins, Lasers, Comets, Hamptons, 420s and 470s) on the shore. He sailed on the log canoe Magic for 12 years. Over the years, he cruised the Chesapeake in a series of sailboats that included his Kings Cruiser 28, a Jeanneau 41, Regatta, his Carter 41, and Tenacious, his C&C 34 and also spent time cruising the Greek Isles and the Caribbean. At the time of this death, he was restoring Dauntless, a McCurdy & Rhodes 44 and former Navy racer, with plans to cruise aboard her.
An avid yachtsman, Gus participated in almost every Chesapeake Bay race on his sloop Regatta, always with a loyal crew. He was also a frequent participant in Block Island Race Week, Charleston Race Week and the Onion Patch Series and crewed in the 2007 Fastnet Race. His offshore racing began as a crew in a SORC race off Miami in 1976. He sailed as a crew in his first Newport Bermuda race in 1982 and in 1997 captained his first of many Annapolis Newport Races, finishing first in class that year. He captained in eight Newport Bermuda races from 1998 to 2012, finishing second in class in 2000 and fifth in class in 2006.
In addition to sailing, he loved motor boats, restoring many boats and, his most favorite, a famous racing boat which he named Black Sheep.
Gus joined the Tred Avon Yacht Club in 1982 and served as commodore in 1995. He became a member of the Storm Trysail Club in 2009 and was just elected as a member of the Cruising Club of America. He was a former member of Miles River Yacht Club.
He is survived by his wife, Carol; his mother, Bessie Koste of Denton; his sister, Constantina Cox of Alexandria, Va.; his sons, Christian of Denton and Jason; daughter-in-law, Maria; and grandson, Nicholas of Baltimore; his daughters, Alden of Atlanta, Ga., and Caroline of Washington, D.C.; and Carol's children, Lori McDonald of Easton, Bryan Swart of Winter Garden, Fla.; and granddaughters, Erin McDonald, Gabrielle, Olivia and Madelyn Swart. He is also survived by his loyal Regatta crew, his family on the water. He is preceded in death by his father, Constantine Geo Koste.
A memorial service and celebration of Gus's life will be held at a later date.
In lieu of flowers, contributions may be made to the organizations that were meaningful to Gus: Tred Avon Junior Sailing Program, 101 West Strand, P.O. Box 337, Oxford, MD 21064, or The Talbot Hospice Foundation, 586 Cynwood Drive, Easton, MD 21601-3805.
To send online condolences please visit www.newcombcollins.com


To order memorial trees or send flowers to the family in memory of Constantine Koste, please visit our flower store.
Send a Sympathy Card