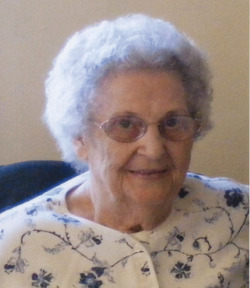 Born on November 18, 1923 in Crapo, MD, she was the daughter of the late Major Bradford and Theodosia Pritchett Bradford.

She attended the schools in the South Dorchester area including Crapo High School.

Mrs. Pritchett was a member of the Wingate United Methodist Church, Wingate, MD.

Mrs. Pritchett had worked for English’s Restaurant for a few years and Airpax, where she retired after twenty seven years of employment.

Preceding her in death besides her parents and husband was a brother Neily Bradford; and two sisters Patsy Bradford and Margaret Greer; three half-brothers Kenneth Bradford, Lawrence Bradford, and Ray Bradford; a sister-in-law Gertie Bradford; a step-daughter-in-law Nina Pritchett; and a step-grandson Clarence Kevin Pritchett.

Funeral services will be held at 1:00 p.m. on Friday, September 11th at Curran-Bromwell Funeral Home, P.A., where the family will receive friends one hour prior to the service. Officiating at the service will be The Rev. David L. Kreek. Burial will follow at Dorchester Memorial Park.

To order memorial trees or send flowers to the family in memory of Dorothea Pritchett, please visit our flower store.
Send a Sympathy Card