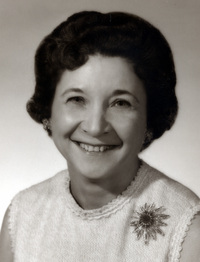 Born on January 28, 1915, she was the daughter of the late John David Webster and Lena Ewell Webster.

Mrs. Frazier was raised in Crapo, Dorchester County, MD. She was one of seventeen who graduated from Crapo High School, Class of 1932. Following graduation, she worked as a young woman with her sisters as a seamstress at local sewing factories. Mrs. Frazier then worked at Eastern Shore Hospital Center, from where she retired at age 62 as a rehabilitation therapist.

She was the wife of the late Freeman E. Frazier who died in January of 1973.

Miss Edna enjoyed going to dinner with family and friends at various restaurants and fund raising dinners to benefit the area churches and fire departments. She also liked to play bingo. Miss Edna enjoyed organizing bus trips with her friend Pauline Robbins to various destinations throughout the country.

The family will receive friends Thursday evening, Nov. 6th from 6 to 8 p.m. at Curran-Bromwell Funeral Home, P.A., Cambridge, MD. Graveside services will be held at 11:00 a.m. on Friday, November 7th at Dorchester Memorial Park Cemetery. Officiating at the service will be The Rev. Delmer Willey, the decedent’s nephew.

Pallbearers will be her grandsons and great-grandsons.

To order memorial trees or send flowers to the family in memory of EDNA FRAZIER, please visit our flower store.