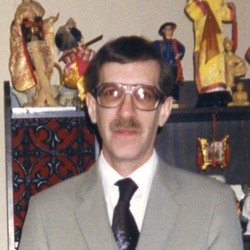 Emerson M. Todd, Jr., 56, of Toddville passed away Wednesday, May 22, 2013 at his home. He had been in declining health for the past few years.
Born February 6, 1957 he was a son of Shirley Audrey and the late Emerson M. Todd, Sr.. Emerson attended local schools and graduated from South Dorchester High School with the Class of 1975.
In his earlier years Emerson had picked crabs at various crab houses in the lower county. Later he worked as a film developer with CVS Pharmacy, K-Mart and Acme. He continued with Acme as long as his health allowed.
Emerson was a quiet person, kind, likeable and very dedicated to his mother and brother. He enjoyed playing bingo at the fire house and socializing with the locals in South Dorchester.
He was a member of Zion United Methodist Church in Toddville.
Surviving besides his mother is a brother Ricky Lee Todd with whom he lived; two uncles Robert and Gillis Todd; cousins David Foxwell, Martha Ann Briggs, Jennifer Mills and Nicole.
A funeral service will be held Tuesday, May 28, 2013 at the Newcomb and Collins Funeral Home, P.A., Cambridge beginning 1 p.m. Officiating the service will be Rev. Barbara Mills.
The family will receive friends the hour prior to the service.
Interment will follow at the East New Market Cemetery, East New Market, MD.
Serving as pallbearers will be Donnie Simmons, Tony Hayden, Billy Asmond, Chris Jones and Jay Newcomb.
Honorary pallbearers will be J.C. Tolley, Andrew Tolley and Donnie Fitzhugh.
Memorial contributions in memory of Emerson can be made to Zion United Methodist Church, c/o Betsy Hughes, 2533 Toddville Road, Toddville MD. 21672

To order memorial trees or send flowers to the family in memory of Emerson Todd, Jr, please visit our flower store.
Send a Sympathy Card