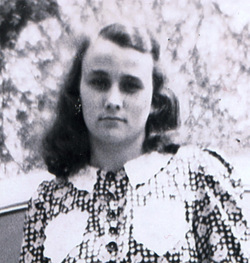 Eunice Brooks Miller, 88, of Cambridge passed away Thursday, January 17, 2013 at Dorchester General Hospital, Cambridge.
Born March 10, 1924 she was the daughter of the late Lee and Claudia Casten Brooks. Growing up in Crapo and Cambridge, she graduated from Cambridge High School. On May 10, 1945, she became the bride of Addison Lincoln Miller. Together, they raised three children and enjoyed over 42 years of marriage. Mr. Miller passed away August 26, 1987.
Eunice and Addison lived in Oxon Hill, Maryland for 10 years but lived the rest of their lives in Cambridge. She greatly enjoyed being a housewife and was the epitome of the perfect wife. She loved her children and got great pleasure from her grandchildren and great-grandchildren. Many fond memories of Granny in her red kitchen will be cherished forever where she enjoyed preparing snow cream and chicken and dumplings. When asked how she would want to be remembered, her answer was “I was a good friend,” and she certainly was. Eunice always had a positive attitude and outlook on life.
Surviving are her three daughters Phyllis Ann Hastings of Cambridge, MD Mary A. Windsor and husband Earl (Blaine) of Secretary, MD and Ruby Jane Donovan of Lewes, DE. Also surviving are grandchildren Robert (Bobby) L. Henkel, Donna Marie Wellman and husband Jay, Bobby Allen Andrews and wife Nicole, Barbie A. Willey and husband Rob, Russell Colbourne, III, Jesse Colbourne and wife Kim, Thomas Donovan and Joseph Donovan; great grandchildren Jayson Wellman, Jenna Wellman, Addison Andrews, Hunter Willey, Jacob Willey, Rayn Delmara Colbourne, Brianna Colbourne and a number of nieces and nephews, as well as her best friend Dot Parks.
Preceding her in death besides her parents and husband are brothers Wallace Brooks, Charles (Chuck) Brooks, Sr. and Robert Brooks and a sister Barbara Newcomb.
A funeral service will be held Tuesday, January 22, 2013 beginning 12:30 p.m. at the Newcomb and Collins Funeral Home, P.A., Cambridge. The family will receive friends the hour prior to the service. Interment will follow at the Eastern Shore Veterans Cemetery, Hurlock. Officiating will be Pastor Steve Trice.
Serving as pallbearers will be Bobby Andrews, Bobby Henkel, Jesse Colbourne, Ray Hastings, Thomas Donovan, Russell Colbourne III, Barbie Willey, and Donna Wellman. Honorary pallbearers will be Joseph Donovan and Addison Andrews.
To send online condolences please visit www.newcombcollins.com

To order memorial trees or send flowers to the family in memory of Eunice Miller, please visit our flower store.
Send a Sympathy Card