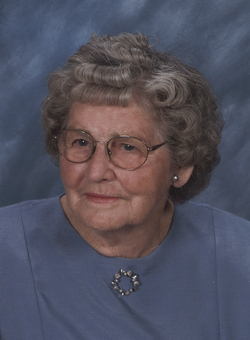 Born on April 25, 1921 in Drawbridge, Dorchester County, Maryland, she was the daughter of the late Samuel A. Lawson and B. Golda Willey Lawson.

She also assisted her husband for ten years at his grocery store, Winnie Bell’s Grocery Store in Vienna, MD.

Mrs. Bell was also a seamstress and liked to knit and sew. She also liked gardening.

Preceding her in death besides her parents and husband was a sister Dorothy Taylor and three brothers Walter Lawson, Wilfred Lawson, Samuel Lawson.

The family will receive friends Monday, March 15th from 2:00 to 4:00 and 6:00 – 8:00 p.m. at Curran-Bromwell Funeral Home, P.A. Funeral services will be held at 11:00 a.m. on Tuesday, March 16th at Vienna United Methodist Church. Officiating at the service will be The Rev. James C. Bongard, Pastor. Burial will follow at Dorchester Memorial Park.

Expressions of sympathy may be made by either sending flowers or making memorial offerings to Vienna United Methodist Church, P.O. Box 278, Vienna, MD 21869.

To order memorial trees or send flowers to the family in memory of Frances Bell, please visit our flower store.