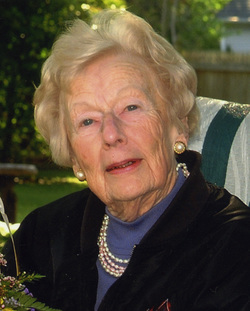 
Frances F. Waldron, 97, of Easton, formerly of Cambridge, passed away Tuesday, December 11, 2012 at the William Hill Manor, Easton.
Born May 22, 1915 in Cambridge, she was the daughter of the late Fred and Lee Horseman Flowers.
In 1938, Frances Flowers and Clifton R. Waldron were united in marriage. Clifton died on October 11, 1990.
For over 40 years, Fran managed and eventually owned Richardson’s Style Shop on Race Street in Cambridge. She enjoyed meeting people and hoped they would remember her from the days of the shop.
Fran was a member of Zion United Methodist Church for many years. She was the first woman president of the Dorchester Chamber of Commerce, Charter member and past president of Quota International, past member of Ruth Stewart Circle, member of the Garden Club and UMW of Zion, also served 2 terms on the board at Dorchester General Hospital.
The last few years of her life she enjoyed bible study and her favorite bible verse since the passing of her husband Clifton was: Philippians 4:13 “I can do all things thru Christ who gives me strength.”
Surviving Fran is a son, Larry Waldron and his companion Chris Cassidy of Easton, MD; granddaughter Debbie Waldron Pratt and her husband Rob of Dover, DE; grandson Scott Waldron and his wife JoAnn of Cockeysville, MD; great grandson Scottie Waldron; brother Bill Flowers of Ohio; mother of her grandchildren Marian Fleischer and a host of friends she cherished, also, her cat Skippy who she truly loved.
Preceding her in death besides her parents and husband was a brother Fred Flowers Jr.
A Memorial Service will be held on Wednesday, December 19, 2012 beginning 1 p.m. at Zion United Methodist Church, 612 Locust St., Cambridge. Officiating at the service will be Pastor Bill Davis and Pastor Kevin Graudin. Family will receive friends an hour prior to the service. Inurnment will follow at Dorchester Memorial Park, Cambridge.
Serving as pallbearers will be Larry Waldron, Chris Cassidy, Debbie Waldron Pratt and her husband Rob.
In lieu of flowers, memorial contributions in memory of Fran can be made to Talbot Hospice Foundation, 586 Cynwood Drive, Easton, MD 21601.
Arrangements are entrusted to Newcomb and Collins Funeral Home, P.A., Cambridge.
To send online condolences, please visit www.newcombcollins.com.

To order memorial trees or send flowers to the family in memory of Frances Waldron, please visit our flower store.