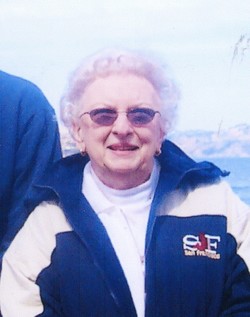 
G. June Ammons, 84, of Crapo passed away peacefully Thursday, March 10, 2016 at her home.
Born August 11, 1931 in Baltimore, she was a daughter of the late Hester Curtis and Charles Howard Haddaway.
June grew up in Pasadena and attended the local schools. She had worked as an Administration Assistant with the B&A Railroad Company in Annapolis.
On August 24, 1973 she married her husband Joe Ammons. Together they moved to Crapo thirty seven years ago. June was always ready to go; anyplace Joe wanted to go was fine with her. She enjoyed crossword puzzles, bingo and all kinds of internet games. All will miss her kind disposition and sweet smile.
June was a member of St. John’s United Methodist Church in Golden Hill. She had served on the Board of Directors, was Treasurer of United Methodist Women, had taught Sunday school and was a member of the Good Timers of Golden Hill.
Surviving are her husband of 43 years Joe; children Fredrick Gutzat and wife Kathleen of Las Vegas, Scott D. Gutzat of Severna Park, MD, Theresa Lewis of Frankenmuth, MI and Jeffrey Lawson of Orem, NC; grandchildren Ronnie Lewis and wife Annie, Jason Lewis and wife Rachel, Chris Edwards, Megan Madejek and husband Brandon; great- grandson Michael Lewis.; along with nieces, nephews and many friends.
Preceding her in death besides her parents was her first husband Fred Gutzat; sister Jane Rushford; brother Charles Haddaway and step-daughter Gwendolyn Ammons.
A memorial service will be held Sunday, March 13, 2016 beginning 2:00 p.m. at St. Johns UM Church, Kirwans Neck Road, Golden Hill, MD. The family will receive friends the hour prior to the service. Interment will follow in the Church Cemetery. Officiating will be Rev. Gary Crouch.
In lieu of flowers memorial donations in memory of June can be made to St. Johns UM Church, c/o Mrs. Doris Lewis, 3347, Golden Hill Road, Church Creek, MD 21622.
Arrangements entrusted to Newcomb and Collins Funeral Home, P.A., Cambridge.
To share memories visit www.newcombcollins.com

To order memorial trees or send flowers to the family in memory of G. Ammons, please visit our flower store.
Send a Sympathy Card