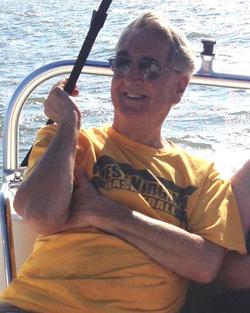 
George W. Hubbard, 68, a retired local pharmacist passed away peacefully early Thursday morning June 2, 2016 at his home in Woolford, Maryland. His loving and supporting family was by his side.
Born October 26, 1947 in Sistersville, West Virginia, he was the son of the late Virginia Schau and George E. Hubbard.
After completing secondary schools in the Sistersville area, George attended and graduated from the WVU School of Pharmacy in 1971. During his college years he married the former Kathryn Henderson in 1970.
For over 45 years George was a pharmacist. Alongside his wife, Kathryn, he owned and operated Hubbard’s Pharmacy in Cambridge from 1983 – 2009. He provided dedicated service to the community and considered his customers as friends. From 2009 until his retirement in 2014 he continued as a pharmacist with Walgreens. He leaves behind a legacy of love and compassion.
George was a member of the Cambridge Lions Club and a lifetime member of the Cambridge Elks Club.
George is survived by his wife of 46 years Kathryn; sons Jeremiah Hubbard, PhD, Joshua Hubbard and his wife Jungwon (Janet) Hubbard, PhD; sisters Ann Hubbard and Kay Hunter; grandson Jonathan Hubbard; a special cousin Kathryn (Kip) Putt and beloved nieces and nephews.
Private services with the family will be held.
In lieu of flowers, memorial donations can be made to Community Foundation of the Eastern Shore, Capt. Adam Mooney Memorial Scholarship, 1324 Belmont Ave., Number 401, Salisbury, MD 21804 or Pleasant Day Medical Adult Day Care, 2474 Cambridge Beltway, Cambridge, MD 21613.
Arrangements entrusted to Newcomb and Collins Funeral Home, P.A., Cambridge, MD.
To share memories and send online condolences visit www.newcombcollins.com

To order memorial trees or send flowers to the family in memory of George Hubbard, please visit our flower store.