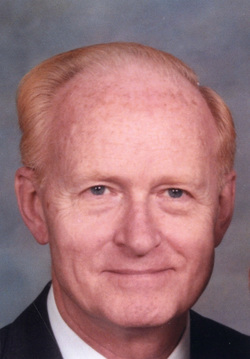 
Dr. George Wygant Phillips, 85, died peacefully at home November 1, 2014. He was born August 5, 1929 to the late George Phillips, Sr. and Claire Louise Daus in New York City. His childhood was spent in Brooklyn and he graduated from Scarsdale High School. He received B.A. chemistry from Wesleyan University and worked in Nuclear Chemistry in Atomic Energy Commission. He received numerous fellowships and went on to earn a Ph.D.in physical chemistry from Harvard University. He also attended Harvard Graduate School of Business Administration.
Dr. Philips spent his career with Union Carbide Corporation (now Dow Chemical). He was relocated to Switzerland where he negotiated patent licenses across Europe and the Middle East. He and his family were transferred back to the US and resided in Greenwich, Connecticut. He worked at the Pan Am building in New York City in the International Public Affairs Department covering trade policy and multinational corporate issues. He became involved in International Trade and Tariff Affairs Committees plus numerous association memberships; he chaired the Chemical Industry Sector Advisory Committee and the International Economic Policy Association.
He and his late wife, Marilyn (Lyn) Miller Phillips, moved to Easton in 1995 to the property which Lyn’s parents, Bill and Edith Miller, purchased in 1964 for their retirement. He was a member of Talbot Country Club, Poplar Islands Yacht Club, Classic Yacht Club of America, St. Andrews Society, ES Wine Tasting Society.
Dr. Phillips is survived by his children Elizabeth (and Noel) Bourdin of Easton, Maryland, John (and Karen) Phillips of Falmouth, Maine; brother, Bruce Phillips of Houston, Texas and three grandchildren (Claire, Mark and Scott).
Services will be private with the family.
In lieu of flowers, donations can be made to UM Shore Medical Center at Easton.
Arrangements entrusted to Newcomb and Collins Funeral Home, P.A.

To order memorial trees or send flowers to the family in memory of George Phillips, Jr, please visit our flower store.