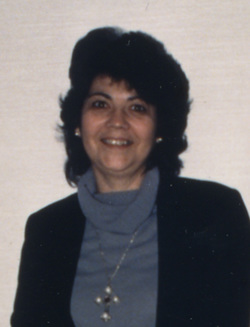 
Geraldine A. Harrington Kinnamon, 72, of Cambridge, Maryland passed away on Saturday, May 23, 2015 at Peninsula Regional Medical Center, Salisbury, Maryland.
Born in Cambridge on November 20, 1942, she was a daughter of the late Gerald Wesley Harrington and Anna Lee Blake Moxey and stepdaughter of Johnny Moxey.
She attended the local schools and graduated from North Dorchester High School with the class of 1960. After graduating she attended Goldey-Beacom College and then worked at Wayne Pump in Salisbury. Geraldine also worked at the Daily Banner, was a home typist for Waverley Press and spent most summers in Ocean City with her family working various jobs.
On December 30, 1961, Geraldine was united in marriage to Robert D. (Bobby) Kinnamon and together raised two children. Bobby died on March 28, 2010.
After her marriage she was employed at Dorchester General Hospital as a medical records clerk and retired after 25 years of service.
Geraldine was a member of Trinity United Methodist Church. She also was a member of the Knitting Club at Marshy Hope and loved knitting things for special occasions. Geraldine enjoyed reading, watching T.V., listening to music, with some of her favorites being, Perry Como, Frank Sinatra, Barbara Streisand and Dean Martin. She was well known by her family for correcting bad grammar. She loved spending time with her children, grandchildren and her sister Linda. Geraldine was known for her easy way with anyone she would meet, a soft spoken lady will be missed by everyone who knew her.
Surviving her is a son Brett G. Kinnamon of Cambridge, MD; a daughter Kelly K. Elzey of Cheraw, SC; grandchildren Brandon McMullen, Brooke Kinnamon, Kirby Kinnamon, Brittaney Sard/Kinnamon, John James III, Braydin Kinnamon and Nayloni Kinnamon; great grandchildren DeAnna Maxwell, Mark Pritchett, Trace Bloom, Gregor Adams, Jr. and Wesley Bloom who is due to arrive in July; her beloved sister Linda H. Hubbard of East New Market; several nieces, nephews and cousins.
Preceding her in death besides her parents and husband was her dog Auggie the Doggie.
A funeral service will be held on Thursday, May 28, 2015 beginning 1 p.m. at Newcomb and Collins Funeral Home, P.A., 308 High St., Cambridge, MD with Rev. Dale Vroman officiating. Interment will follow in the East New Market Cemetery. Family will receive friends an hour prior to the service.
Serving as pallbearers will be Brandon McMullen, John James, III, JR. Bloom, Clay Bramble, Gary Hubbard and Blair Hubbard. Honorary pallbearers will be Braydin Kinnamon and Daniel Bishop.
In lieu of flowers, memorial contributions can be sent to Newcomb and Collins Funeral Home, P.A., 308 High St., Cambridge, MD 21613 to help defray funeral cost.
To share online condolences with the family, please visit www.newcombcollins.com