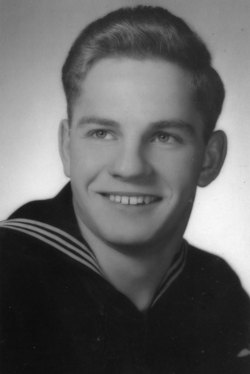 Born August 26, 1929 in Preston, he was the youngest son of Jacob and Amelia's nine children. After High School, Glenn served in the Navy aboard the USS Wasp from 1949-1952. Returning home, he married Thelma (Sue) Dilworth in 1953. Miss Sue preceded him in death in 2011.

Glenn was a gifted athlete who received a tryout as a catcher for the Philadelphia Phillies prior to working for the MD State Highway Administration in Caroline County for 27 years. He was a lifetime member of the Preston Volunteer Fire Department and the Lutheran Church. A warm and gregarious person, most think of Glenn as the nicest man they ever met and the most talented gardener.

A viewing will be held on Thursday, March 30, 2017 from 12:00 to 1:00 p.m. at Newcomb and Collins Funeral Home, P.A., 308 High St., Cambridge. A funeral service will follow with military honors at the Maryland Eastern Shore Veterans Chapel, Hurlock, MD beginning 2:00 p.m. Interment will follow in the cemetery.

In lieu of flowers, the family requests donations to be sent to the Preston Volunteer Fire Department, 3680 Choptank Road, Preston, MD 21655.

To send online condolences to the family, please visit www.newcombcollins.com

To order memorial trees or send flowers to the family in memory of Glenn Schmick, please visit our flower store.