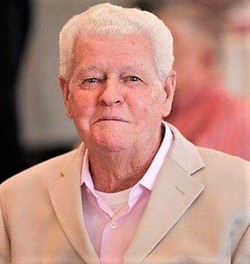 
Guy W. Willey, Sr., 86, of Cambridge passed away peacefully Monday, January 16, 2017 at his home with his family and companion by his side.

Born October 3, 1930 in Cambridge, he was a son of the late Joseph Willey, Jr. and Estella Olivia Mills. After graduation from Cambridge High School, (Class of ’48) Guy began working at the Blackwater National Wildlife Refuge as a clerk. In 1951 Guy left his job at the refuge to serve his country in the U. S. Army, during the Korean War. After being stationed in Germany he was discharged in 1953 with military honors. Upon returning home he also returned to his job with Blackwater. On January 14, 1956 he married the former Fay Erskine. Fay passed away August 25, 2002.

Guy’s love of nature and wildlife led him to his career with the U.S. Fish and Wildlife Service. He retired in September of 1985 as a biological technician, after a span of thirty-three years and eight months. His career was dedicated to protecting the marsh and its ecosystems at Blackwater National Wildlife Refuge. Guy contributed significantly to the recovery of the American bald eagle. He established the protected-area concept for nesting sites, which is used nationwide. The eagle was released from the endangered species list in 2007.

After his retirement from the refuge, Guy continued his sincere dedication to wildlife conservation. Known as the “Squirrel Man”, he worked twenty years as a contractor with the State of Maryland Department of National Resources helping to restore the Delmarva Fox Squirrel population.

Guy was a recipient of many conservation awards recognizing his dedication and contributions to wildlife conservation. He received the Gulf Oil Conservation Award in 1985, and the highest honor award presented by the U.S. Department of the Interior, the Distinguished Service in 1986.

Guy was also a realtor at one time associated with Williamson Real Estate in Cambridge.

At the age of 80, Guy began capturing his love of local wildlife, flowers and butterflies, and the natural landscape of Dorchester County through his amateur photography. He especially enjoyed taking candid photos of friends and his family.

A private committal service with military honors will be held at the Maryland Eastern Shore Veterans Cemetery. Interment will follow.

A memorial service will be held Saturday, January 21, 2017 at Countryside Christian Church, 5333 Austin Road, Cambridge, MD beginning 1:00 pm. Officiating will be Rev. Doug Ridley and Rev. Dave Bennett. The family will receive friends from 11:30 am till the service.

To order memorial trees or send flowers to the family in memory of Guy Willey, Sr, please visit our flower store.