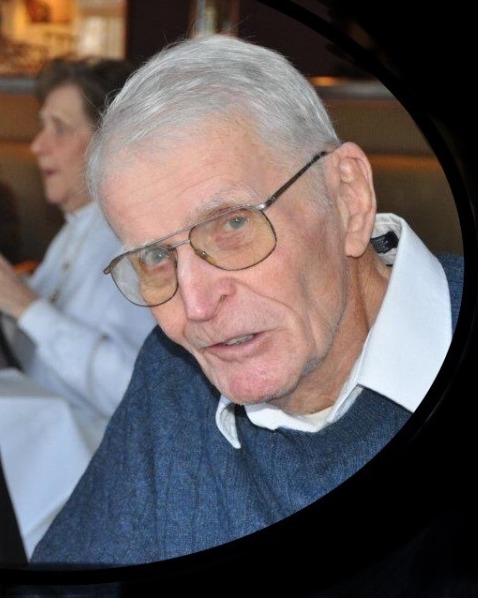 Harold Applegarth passed away peacefully in the company of his loving children on February 15, 2019 in Baltimore, Maryland. Born May 13, 1922 in Wilkinsburg, Pennsylvania to Cecil Keene and Minnie (Donahey) Applegarth. Harold was raised in Cambridge, Maryland in the tidewater Eastern Shore. Educated at Washington College and later awarded a Master of Laws Degree from the University of Baltimore.

Harold worked in Real Estate and Property Management throughout his life.

Harold married Harriet Suzanne Bryan of Ashtabula, Ohio in 1949.  Sue predeceased him in 2014 after 65 happy years of marriage and he missed her greatly.

Harold will be remembered especially for his love of a “Good Story” often declaring that as an Applegarth, “it’s better to tell a great story than to rely on the truth.” He had a great sense of humor; insisted on reading the daily newspaper; was skilled at shucking and eating oysters. He was a master gardener and was instrumental in assisting his daughter in restoring the gardens at The Cloisters in Maryland. He had an extensive knowledge of his family’s history on the Eastern Shore and more than anything he loved visiting Medicine Hall, the family’s ancestral home at Golden Hill.

Harold is survived by his children Theodore Arter Applegarth and Ann Noel Applegarth, both in Baltimore, MD; as well as many nieces, nephews, cousins and friends throughout Maryland and the Eastern Shore.

A Mass of Christian Burial will be held at 11 a.m. on February 26, 2019 at the family’s historic parish, St. Mary’s Star of the Sea Catholic Church, Church Creek, Maryland with Celebrant Bruce Byrolly.  A visitation with the family will be held an hour prior to the service.Interment will follow the service in the adjoining cemetery with military honors.

A Celebration of Harold’s Life will be held at The Cloisters, 10440 Falls Road; Lutherville, Maryland 21093 at a later date.

To order memorial trees or send flowers to the family in memory of Harold Applegarth, please visit our flower store.
Send a Sympathy Card