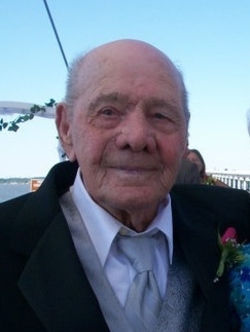 Harold "Bill" Dawson, 91, of Cambridge passed away on Wednesday, January 1, 2014 at Coastal Hospice at the Lake, Salisbury.

Bill was born in Rawlings, Maryland on March 30 1922, the son of Cora Peggy Gordon and Andrew Sherman Dawson. Mr. Dawson came to the south Dorchester area as a young boy and moved to Cambridge in the late 70's. Mr. Dawson met his beloved wife Ida Pauline Nave in Cumberland, Maryland after returning home from the war. They were married from Nov 1945 until her death in January 2005. He mourned her loss terribly.

He served meritoriously during World War II in the Pacific Rim and was honorably discharged from the Air Force. He was aboard the ship "USS Morrison R. Waite” when it was hit by a Kamikaze plane.

He had been a waterman for most of his life after a short time as a farmer in Caroline County.

Preceded in death by his beloved wife of more than 59 years Ida Pauline Nave; son Patrick Corey Dawson ; mother Cora Gordon Bender; father Andrew Sherman Dawson; brothers Shannon, Quentin and Tommy; and a sister Dorothy.
He is survived by his son Harold “Billy” Dawson Jr. (Casey) of Cambridge and daughter Sheila Nimmerrichter (Larry) of Waldorf . Grandchildren are Gordon (Janet) and Steven Dawson of Cambridge, Michelle McDaniel (Jeff) of Charlotte Hall, Melissa Spielman (Steve) Easton , LJ Nimmerrichter (Amy) Lynchburg, VA , Brandy Cumberland (Irving) Toddville and Ariel Dawson (Scott) of Federalsburg. He leaves 4 step grandchildren, 7 great grandchildren and one great-great grandson Ian born on Dec 27. He leaves one sister Viola Dietert. Mr. Dawson has a number of nieces and nephews. Many other special children have come into his life over the years and held a special place in his heart everyday.

His family is very grateful for all the kindnesses shown during Mr. Dawson's illness.

A funeral service will be held Monday, January 6, 2014 at Newcomb and Collins Funeral Home, P.A., Cambridge beginning 12:30 p.m. Officiating the service will be Pastor George Wheatley. The family will receive friends the hour prior to the service.
Interment will follow at Maryland Eastern Shore Veterans Cemetery, Hurlock, with military honors.

"Thought a lot about my Dad and how to tell you who he was.
I can't measure it in work related accomplishments, although, he worked hard at what he did, he also enjoyed it very much. He was a commercial waterman, and it suited him well, as it was seasonal and allowed him much freedom to read voraciously. I got through US history without studying because he would read while we were at school (during the winter when he couldn't work) and drill all that he learned into us when we came home...(school all day,, oh joy).
I can't measure it in volunteer services, although he volunteered for the Conservation Corp at 15 and the Army Air Corp at 17 where he served meritoriously for 6 years in the Pacific during World War II.
I can't measure it in wealth, for though he worked hard his possessions were not more than average, although, if you came to his home at dinner you might be reminded of the story of the loaves and fishes as there was always enough.
He can't be defined by trophies or badges as the only ones he had were pinned to his chest during the war, although, if you asked him , his greatest trophy would be the "most beautiful girl in the world" my mother.
He quietly lived a life out loud as he spared no words, looked to the face of everyone he met to offer a kind word ,to hear a need, a story or share a smile. He genuinely loved the science of "people". We would have a gathering at our house, and, if you told him in advance, he would have anxiety about being in a group, although, when he got here he would be the most popular guy in the room. He was lost in hearing "their" story. He would take his "hearing you stance" his hand deep in the pocket leaning in to give you his full and undivided attention. This he passed to my eldest daughter, the gift of making you feel as if you are the only person in the room.
He was a man of ideas, consumed with grand schemes to revolutionize the way we are moved about and was still plotting our fortune from his latest invention. I really wanted to be an heiress so I was cheering him on!
He knew the geography of the world like the back of his hand, he knew the leaders of all the countries and was consumed by all things English. Gordy made him very happy by bringing home his lovely English wife Janet.
He would sit on the back porch fascinated by the animals God had brought to his door, the jaybirds ate from his hand, he pulled ticks from the ears of the squirrels. That little backyard was the same to him as a safari to another person. He lived where he was, he was innately interested in what and whom was around him. His world was as big as it needed to be although he truly knew the size of it.
He loved children and would turn their little antics into a variety show no television could replicate.
What I have learned about my Dad through writing this is one thing, he had what many of us chase...contentment. He loved his wife, his children, his grandchildren ,his family and his home . Most enjoyable to him was for someone to take the time to visit, sit a spell and chat. Although when time came for you to leave you surely knew you would come again.
Now, I know how to tell you who he was , he was a friend to man, a giant to his family and a hero to this girl.
Goodbye Daddy dear, until we meet again, your lucky, lucky daughter"

To order memorial trees or send flowers to the family in memory of Harold Dawson, Sr, please visit our flower store.
Send a Sympathy Card