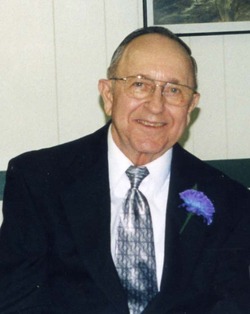 John Walter O’Neil Insley, Sr’s spirit departed this world September 21, 2016 after 85 years, where he was loved immensely by his family and fondly thought of by all who knew him. At the time of his passing, he was under the kind care of Coastal Hospice at the Lake in Salisbury, MD where he was constantly surrounded by his loving family and wife of 66 years, Goldona.

O’Neil was born May 15, 1931 to the late Walter W. Insley and Naomi McFeeters Insley in Andrews, MD. Mr. Insley attended school in Crapo, MD form which he graduated in 1948. On February 4, 1950, he married his boyhood love, the former Goldona L. Newcomb. O’Neil worked as a diesel Mechanic at Madewell Shops for 14 years and later for the Dorchester County Highway Department from where he retired in the early 1990’s after 30 years of service.

In his younger years O’Neil enjoyed hunting and fishing as well as taking a lifelong delight in gardening. After retirement, he enjoyed working with his brother Dale at the Insley Saw Mill which they owned and operated together. He and his wife enjoyed many evenings with the “Hardees Gang” coffee and laughs. Mr. Insley was known as a good humored man who had a fondness for playing tricks and telling jokes. He possessed an endless curiosity about nearly everything. He had a contagious and kind smile that could warm a heart on even ones worst day. O’Neil was also a good hearted man and all of the above qualities continued well into the last weeks of life. Spending time with his family was his greatest love, as he showered them all with his affection. His grandchildren and great grandchildren gave him a special joy.

Besides his loving wife of 66 years, Goldona N. Insley, he is survived by his two children, Gale I. Todd and her husband Phillip and John Walter O’Neil Insley, Jr. and his wife Kimberly, all of Cambridge, three grandchildren, Sunday Kaye Kaminski and partner Mark, Andrew Insley Todd, and Amanda Aaron and her partner Gene, also all of Cambridge, as well as two great grandchildren Olivia M. Henry and James A. Greenlee, Jr. Mr. Insley is also survived by two brothers Billy L. Insley of Cambridge and Dale N. Insley, Sr. and his wife Minnie of Andrews, MD and several nieces and nephews. Besides his parents he was preceded in death by two brothers Hubert Burton and Boyce J. Insley.

Funeral services will be held at Newcomb and Collins Funeral Home in Cambridge MD on Thursday, September 29, 2016 at 1:00 p.m. with a viewing one hour prior to the service with Pastor Charles Hudson officiating. Interment will be private.

To order memorial trees or send flowers to the family in memory of J. Insley, Sr, please visit our flower store.
Send a Sympathy Card