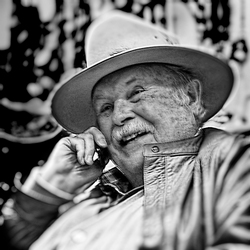 Jack was born February 1, 1930 in Detroit, Michigan, the only child of the late William L. Upchurch and Lillie Belle Baird. He attended McKenzie High School in Detroit, Michigan. On November 27, 1946, he was honorably discharged from the U.S. Marine Corps. He married Marilyn Rasmussen on May 16, 1954. Subsequently, on June 4, 1956, he graduated from Andrews University with a Bachelor of Arts in Theology.

Jack worked as Dean of Men at Walla Walla College in College Place, WA, Blue Mountain Academy in Hamburg, PA and at Southern Adventist University in Collegedale, TN. He later worked for Manor Care as Executive Vice President during a period of rapid growth and expansion. In June of 1973, he left Manor Care and partnered with Thomas L. Callahan to start his own business in Rockville, Md., Collingswood Nursing & Rehabilitation Center. His company would eventually build a network of five nursing homes, an assisted living facility, and a pharmacy. Jack’s company currently owns or operates two nursing homes in Rockville, Collingswood and Potomac Valley Nursing & Wellness Center, as well as an assisted living / independent living facility in Frederick, Edenton Retirement Community.

In addition to growing his businesses, Jack had many interests. Jack was raised as a Master Mason at Vaux Lodge #406 in Hamburg, Pa. After buying his first horse at the age of 8, Jack’s passion for horses grew. Throughout most of his life, Jack owned a small herd of quarter horses as well as racing trotters. He traveled the world hunting big game and waterfowl, and enjoyed local cuisine everywhere he found himself. Along with partners Thomas L. Callahan and Manfred Enns, Jack developed a cattle ranch in Paraguay, South America, which was his pride and joy. Whether at home or abroad, Jack’s Christian beliefs compelled him to help others in need.

True to the sense of humor that many will remember him for, Jack suggested that, in lieu of services, his friends get together, have a drink, and send him the bill. Private memorial services have been held by the family. Memorial contributions may be made to Heifer International, 1 World Ave., Little Rock, AR, 72202; The Talbot Hospice Foundation, 586 Cynwood Dr., Easton, MD, 21601; or another charity of one’s choice.

Arrangements were entrusted to Curran-Bromwell Funeral Home, P.A. Condolences and memories may be shared with the family at www.curran-bromwell.com.

To order memorial trees or send flowers to the family in memory of Jack Upchurch, please visit our flower store.