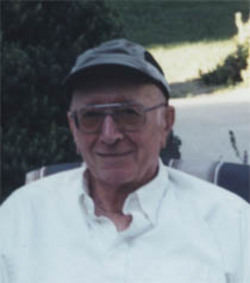 Jack was born August 31, 1930 in Easton, MD, the only child of the late Ralph H. Jones and Evelyn Roe Jones.

Jack attended school in Talbot County and graduated from Easton High School, Class of 1947. After graduation Jack joined the Army National Guard and after fifteen years he received an honorable discharged with the rank of Corporal.

On September 14, 1952, he married the former Jean Fairbank in Tilghman, MD.

Jack started his working career as a car salesman until he purchased a store in Cordova, where he was the owner and operator of the store for more than seventeen years. After selling the store, he returned to car sales from where he retired from Bob Smith Automotive.

Jack was a coach for local Little League and Pony League Baseball for many years. He also enjoyed the outdoors and was an avid hunter and fisherman. Jack was a life member of the Cordova Volunteer Fire Dept.

A Memorial Service will be held Friday September 25,2009 at 2:00 p.m. at the Immanuel Lutheran Church, 7215 Ocean Gateway, Easton MD where the family will receive friends one hour prior to the service. Officiating at the service will be The Rev. Kevin Graudin and The Rev. Nevin Crouse. Inurnment will be held privately at a later date in Spring Hill Cemetery, Easton.

Friday September 25, 2009 , 2:00 p.m. at Immanuel Lutheran Church Share your thoughts and memories in the guestbook.

To order memorial trees or send flowers to the family in memory of Jackie Jones, please visit our flower store.