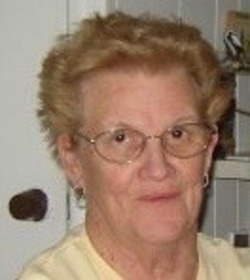 Born on November 2, 1938 in Brooklyn, Maryland she was a daughter of the late Marion Odetta and Henry Arthur Sanders.

She attended the local schools and graduated from Southern High School.

On July 7, 1956 Jacqueline married her sweetheart Jerry P. Clark and together raised four sons. They made their home in Secretary for the last 9 years. Mr. Clark died on December 9, 2017.

Jacqueline worked side by side with her husband at the family owned business, Cambridge Auto Recyclers.

She enjoyed boating, fishing and going to the beach. In years past the Clark family owned a beach house in Montego Bay and she thoroughly enjoyed taking her family there to spend the summer months. Her grandchildren were the highlight in her life. She will truly be missed by all who knew her.

Preceding her in death besides her parents and husband was a daughter-in-law Elaine Clark; sisters Edna Harmison and Marion Newton.

A celebration of life will be held at a later date. Inurnment will take place in the Cedar Hill Cemetery in Brooklyn, Maryland.


To order memorial trees or send flowers to the family in memory of Jacqueline Clark, please visit our flower store.