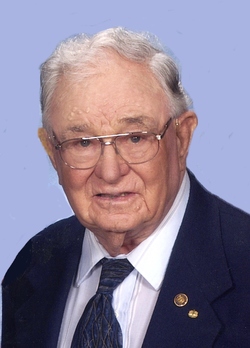 
James F. Handley, 88, a well known Cambridge farmer and businessman, passed away Friday, April 18, 2014 at his home.
Born in Cambridge on January 2, 1926, “Jim” was the only child of the late Mabel Kirwan and Raymond Handley. He attended the local schools and graduated from Cambridge High School. Jim was trained as an electrician but the family farm drew him back to his roots. Always a very ambitious man, in his earlier years he would farm during the day and then work as a truck driver at night. In 1965 he developed the Bay Country Mobile Home Park which he continued to own. He also was President of Wil-Han Inc. Later he developed Beaver Run Mobile Home Park in Linkwood and managed the park until he and his partners Sonny Whitely and Richard Lowry sold the park. Farming was his true passion besides his family and trusted canine partners.
On June 29, 1946, he married the former Betty Anne Fleming. Together they operated the family businesses. They were blessed with two daughters. The Handley’s were members of Friendship United Methodist Church. Mrs. Handley passed away October 8, 1995.
Over the years Jim was always involved in civic organizations. He was a 60 year member “Master Mason” of the Cambridge Lodge #138, member of Cambridge Elks, Moose Lodge #1211, American Legion Post #91, Dorchester Farm Bureau and Tall Cedars. Jim had also served on the Dorchester County Planning and Zoning Board.
During the past four years Mr. Handley’s health had been declining. Because of the care given by his daughters with the assistance of caregivers, he was able to stay at his home, the family farm, until his death. The family will always be grateful for the wonderful care, compassion, and support given by his caregivers.
Surviving are his daughters Shirley Gannon and her husband Vincent and Jacquelyn Handley, all of Cambridge. Also surviving is his grandson Justin Koshar and great grandson Andrew Jupitz.
A visitation will be held Tuesday evening, April 22, 2014 from 6 till 8 p.m. at the Newcomb and Collins Funeral Home, P.A., 308 High Street, Cambridge.
A funeral service will be held on Wednesday, April 23, 2014, also at the funeral home, beginning 1 p.m. Officiating the service will be Rev. Mary Ann Farnell. Members of Cambridge Lodge #138 will perform a Masonic service at 12:45 p.m. Prior to the Masonic service family will receive family and friends beginning 12:00. Interment will follow in Dorchester Memorial Park, Cambridge.
Serving as pallbearers will be Clint Fleming, Clay Fleming, Chip Fleming, Billy Fleming, Jerry Bradshaw and Justin Koshar.
Honorary pallbearers will be Richard Lowry and Donald Jones.
In lieu of flowers memorial donations can be made to Friendship United Methodist Church, c/o Karol Redline, 7 Shady Drive, Cambridge, MD 21613; Baywater Animal Rescue, 4930 Bucktown Road, Cambridge, MD 21613 or an Animal Rescue of your choice.
To share memories or to send online condolences to the family please visit www.newcombcollins.com

To order memorial trees or send flowers to the family in memory of James Handley, please visit our flower store.
Send a Sympathy Card