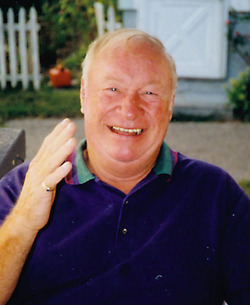 Born in Vienna, MD in 1932, he was the son of the late John Walter Spear and Anna Bennett Spear. A graduate of Cambridge High School and the University of Maryland, College Park, he played football and first string soccer, and was in the marching band at both schools as an accomplished clarinet player. He was an avid golfer and throughout the years enjoyed memberships in the Lions Club, Elks Club, American Legion and several Country Clubs. He had a lifelong love of fishing, hunting and boating.

Mr. Spear graduated from Pensacola Naval Flight School and was appointed as a Naval Flight Officer in the United States Marines, flying combat missions in the Korean War.

Following his military service, he founded J.B. Sales Co., a manufacturer's representative agency specializing in utility sales, where he was still working until his death. Jim enjoyed many, many years membership with other representatives from all over the country, in the Electrical Equipment Representatives Association.

Preceding him in death besides his parents was a brother Jay Spear.

A memorial service will be held Sunday, December 27th at 2:30 p.m. at Curran-Bromwell Funeral Home, 308 High St., Cambridge, MD, where the family will receive friends an hour before the service. Officiating at the service will be The Rev. Mary Ann Farnell.

Family and friends should arrive at the cemetery adminstration building one half hour prior to the scheduled service time.

1:00 P.M. ,Tuesday, April 27, 2010
Arlington National Cemetery Columbarium
Memorial Dr. Arlington, VA 22211
Notes: Family and friends should arrive at the cemetery approximately one half hour prior to the scheduled service time.

To order memorial trees or send flowers to the family in memory of James Spear, Sr, please visit our flower store.
Send a Sympathy Card