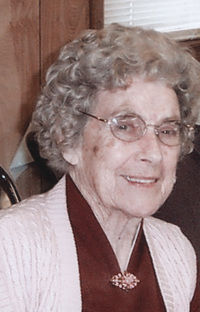 Born on April 13, 1920 in Cambridge, MD, she was the daughter of the late Olin Henson Elzey and Cecilia Edna Wallace Elzey.

As a young girl, she resided in Cambridge for just a short time and was raised and educated in South Dorchester.

For most of her working life, she was employed with the Dorchester County Board of Education in Food Services and retired after twenty five years of service. She worked at South Dorchester School during the school year and worked several years at St. Clair Elementary School and Cambridge High School in the summer programs. She enjoyed her work because of her love for children.

Jean loved her family, church and country. It was only fitting she would pass on Memorial Day, a day so dear to her heart.

Anyone who knew Jean couldn’t help but notice her compassion for people and that she was a real “people person”.

Jean adored being with her family and was certainly well known for her great cooking. When she was a younger woman, she enjoyed gardening. In her later years, she enjoyed watching the birds and the squirrels in the yard and also had a great appreciation and love of flowers.

Preceding her in death besides her parents and husband were three brothers Wallace Elzey, Albury “Toots” Elzey and his wife Olive, Prettyman Elzey and his wife Virginia; two brothers-in-law Sidney Bennett and Robert Ruark; and an infant sister.

Funeral services will be held at 1:00 p.m. on Thursday, May 28th at Curran-Bromwell Funeral Home, P.A., where the family will receive friends one hour prior to the service. Officiating at the service will be The Rev. Gary L. Crouch. Burial will follow at St. John’s U.M. Church Cemetery at Kirwan’s Neck in Golden Hill.

To order memorial trees or send flowers to the family in memory of JEAN INSLEY, please visit our flower store.