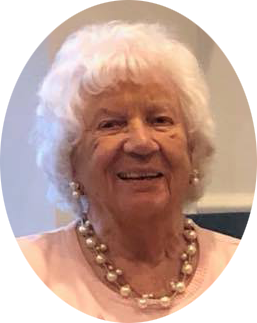 Joan Harrington passed away peacefully at Johns Hopkins hospital with her family at her side on Tuesday morning March 12, 2019.  She was born in Boston, Massachusetts, the daughter of the late Spencley and Bethel Ross.

While studying at Westbrook Junior college, Joan met William Harrington of Swanton, Ohio. His naval destroyer was in port for liberty. The sailors attended a dance at the college and it was love at first sight. Joan and Bill kept in touch during the war and were reunited in 1944. After WWII, Bill stayed in the Boston area and attended Northeastern University on the GI Bill.  After graduation from Westbrook, Joan worked in Boston as a medical secretary for Dr. Fitzhugh for several years. Joan was very fond of Dr. Fitzhugh who filled in as a father figure for her.

Joan and Bill married on May 20, 1951 and began a life together in Braintree, Massachusetts. With Bill working as a restaurant manager in Boston, Joan was able to become a stay at home mother to her son, Kurt R Harrington and her daughter, Betsey J Harrington. While living in Braintree, Joan was a member and volunteer at Emmanuel Church, as well as a volunteer at South Shore Hospital.

Joan and Bill moved to Marshfield, Massachusetts in 1970 and purchased an antique house “Ye House of Ye Open Hearth”. Joan loved learning about and shopping for antiques, with her husband, to fill the old house with period furniture.

After her mother passed away, Joan and Bill moved to Melvin Village, New Hampshire. Joan enjoyed her circle of friends for bowling and quilting. Joan made many beautiful hand-stitched quilts.  She also loved having a Newfoundland dog for a pet.

A year was spent in the Commonwealth Avenue area of Boston. Then in the early nineties Joan and Bill were live-in Innkeepers at Gilmanton, New Hampshire and Stowe, Vermont before moving to the lobster fishing village of Cutler, Maine, where her son Kurt and (Carolyn) own a vacation home with a lovely view of the harbor. Joan enjoyed entertaining friends and set a beautiful table. Many of the lobsters on the menu were caught and cooked by her husband.

Winters were spent on Nantucket Island, Massachusetts from 1998-2001 inn-keeping at Seven Sea Street Inn. Joan kept track of all the room reservations while Bill baked the breakfast muffins. Many fun times were had visiting with her daughter Betsey who lived on Nantucket at the time. One year a sperm whale washed ashore and the skeleton preserved using the Whaling Museum antique whaling tools.

Joan and Bill moved to Gaithersburg, Maryland in 2001 to be near their son Kurt, daughter-in-law Carolyn, and grandsons William and Swen. After her husband Bill passed away in 2003, Joan moved to Cambridge, Maryland to live with her daughter Betsey.

Joan loved all the many friends she made in Cambridge. She volunteered for ten years at the Dorchester General Hospital gift shop. Attended St. Paul’s Church, where she was a member of the Joy group. Volunteer activities at St Paul’s included Flower Fair, Soup Days, and down in the basement with the clothing boutique. Joan was able to drive her car into her early nineties and enjoyed being independent and able to get herself to medical appointments, grocery shopping, and running errands for her daughter’s business. Joan was a sweet woman well-liked by all who knew her. She is survived by her daughter Betsey Harrington, son Kurt Harrington, daughter in law Carolyn Harrington, grandson Will Harrington, granddaughter in law Kate Winston, great-granddaughter Josie, grandson Swen Harrington and fiancée Suzie Wilson.

Joan’s wishes are to be cremated and her ashes laid to rest in Westborough, Massachusetts, alongside her husband, mother and father, and grand-parents.  A graveside service will take place with family members, sometime in the future on a lovely, warm, sunny day as she wished.

For all of those who knew Joan and those who have enjoyed her story, please celebrate life, as she did, every day. Joan always “made the best of things” in every situation, and “had a really good run” with a long, active, and happy life.

To order memorial trees or send flowers to the family in memory of Joan Harrington, please visit our flower store.