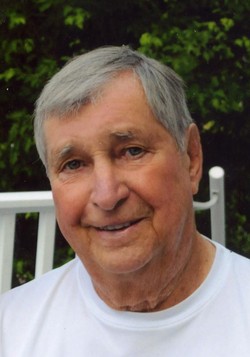 
John D. Fetcho, 84, of Hoopers Island passed away on Sunday, June 4, 2017 at his home with the love and support of his family by his side.
Born on October 28, 1932 in Brownfield, PA., he was the son of the late John I. and Ora Doyle Fetcho.
He attended the local schools and graduated from South Union in Uniontown,PA with the class of 1950.
John entered the U.S. Army in 1953 and proudly served his country as a CPL (T) for two years. He received the Good Conduct and National Defense Service Medal.
In 1979 John moved to the Eastern Shore from Glen Burnie. On July 1, 1979 he married the former Shirley Justice. Together they made their home on Hoopers Island. John very much loved the island, the life style and its people. He had built three houses on the island and started and operated Island Pride Grocery for 23 years. John was very well liked and respected by the community and honored to have left his mark on the area he loved so dearly. John also co-owned and co-operated Waterman’s Cove in Salisbury for over 15 years. John was an avid hunter, hunting in Canada, Mexico and all over the United States. He would rather hunt than eat or sleep.
John was a member of Hosier Memorial Methodist Church, American Legion Post #91, Cambridge Moose Lodge #1211, Hoopers Island Vol. Fire Co., National Turkey Foundation, National Rifle Association and the Elk Foundation.
Surviving John besides his wife Shirley are his children Kimberly Waldt (Jobi) of Baltimore, Michelle Bramble (Jeff) of Pocomoke, and William (Bunky) Horsey (Virginia) of Iowa; grandchildren Matthew and Seth Ruble, Cotie Lyn, Temujin and Hunter Horsey, Tara and Brett Bramble; great grandchildren Anthony Ruble and Christian Mercedes. John is also survived by a bonus son, John Short who was thought of as his very own.
Preceding him in death besides his parents was a sister and brother-in-law Wanda Jean and Fred (Bo) Johns.
A viewing and visitation with family will be held on Wednesday evening, June 7, 2017 at Newcomb and Collins Funeral Home, P.A., Cambridge from 6-8 p.m.
A funeral service will be held on Thursday, June 8, 2017 at the funeral home beginning 1 p.m. with Rev. Doug Ridley and Les Hutton officiating.
Family will receive friends an hour prior to the service. Interment will follow at Dorchester Memorial Park with military honors.
Serving as pallbearers will be Bryan Hall, Joe Hayden, Phil Jones, Harry Phillips, Joe Ruark and Eddie Dean.
Honorary pallbearers will be Calvin Travers, Sam Brooks and Greg Burton.
In lieu of flowers, memorial contributions can be sent in John’s name to Hoopers Island Vol. Fire Co., c/o Rosemary Dean, P.O. Box 125, Fishing Creek, MD 21634 or Hosier Memorial Methodist Church, P.O. Box 41, Fishing Creek, MD 21622 or Coastal Hospice Foundation, P.O. Box 1733, Salisbury, MD 21802.
To share online condolences with the family please visit www.newcombcollins.com

To order memorial trees or send flowers to the family in memory of John Fetcho, please visit our flower store.