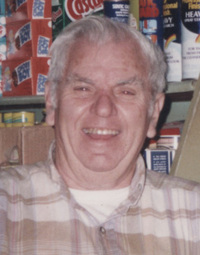 Born on August 19, 1928 in The Neck District, Cambridge, MD, he was the son of the late John V. Lewis, Sr. and Naomi Rose Phillips Lewis.

On September 6, 1953 he married the former Shirley Faye Hurley.

Mr. Lewis owned Lewis Drive Inn on Washington Street in Cambridge several years ago. He was the proprietor of the county’s famous Lewis Store for fifty seven. This country store offered Dorchester’s Neck District community fresh produce, meats, groceries, gas and various unusual sundries. The store was just as known for Lewis University, which Mr. Lewis served as the Dean. This area is located in the far left back of the store where people shared and learned about life’s experiences, stories and tales. It was the only place to go to seek such valued information. Mr. Lewis retired in May of 2004.

Mr. Lewis was a member of the American Legion Post #91, Neck District Volunteer Fire Department and the Cambridge Yacht Club. He had also served on the Planning and Zoning Board for several years. As a younger man, he was an avid fisherman and hunter.

Preceding him in death besides his parents was a brother William “Bill” Lewis.

The family will receive friends Tuesday, May 19th from 2-4 and 7-9 at Curran-Bromwell Funeral Home, P.A., where a Masonic Service will be held at 8 p.m. Funeral services will be held Wednesday, May 20th at 2:00 p.m. at Christ Episcopal Church, located at Church and High Streets, Cambridge. Officiating at the service will be The Rev. Walter Reuschling and assisted by The Rev. Michael D. Reddig. Burial will follow at St. John’s Chapel Cemetery, Cornersville-Cambridge, MD.

Honorary Pallbearers will be Donald Webster and David Marshall, Sr.


To order memorial trees or send flowers to the family in memory of JOHN LEWIS, JR, please visit our flower store.
Send a Sympathy Card