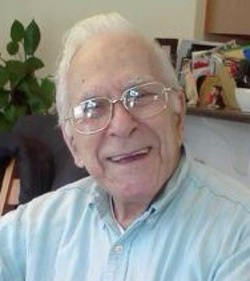 John Joseph Marzullo, 84, of Church Creek passed away peacefully on Friday evening August 9, 2013 at the Chesapeake Woods Center, Cambridge.
Born March 2, 1929 in Baltimore, MD he was a son of the late Rose Lamartina and Vincent Marzullo Sr.
As a young man John joined the U.S. Army and drove tanks, he also became an instuctor.
Mr. Marzullo was a member of the Jesus Church in Cambridge and was involved in the U.S. Missionaries with Lord’s Servant and Christian Helps Ministry. Serving the Lord was a big part of John’s life. He was a volunteer at the VA in Cambridge and thoroughly enjoyed every minute that he could be of help.
John was a Cobbler by trade. He had owned and operated JayMar’s Shoe Repair in Philadelphia and worked over 40 years in this profession. He was known to design business cards and put a bible verse on them and carried them with him passing them out to anyone he saw.
In his family’s eyes he was considered a “Beacon of Light”. He looked forward to spending time with his children and grandchildren. “Pop” as he was referred to was a jokester and a singer, when there was music playing you could be sure he would be singing along. He was his daughter Gina’s best friend doing everything together even singing her a special lullaby each night before bed. A lot of his time was spent cutting up and joking with his sister Rose. His family loved him very much and he will be missed by each and everyone of them.
Surviving him are two daughters Gina Marzullo of Cambridge, MD and Jillerd Shiflet of Annandale, VA.; adopted son Samuel Elzey of DE.; grandchildren Melande Roe Ross, Stephanie Roe Pritchard, Gretchen Hessler, adopted granddaughter Brittney Elzey; great grandchildren Kelsey Lynn Jones, Karlie Elizabeth Jones, Jersey Alexis Kanarr, Hope Victoria Pritchard, Charles Daniel Pritchard and Dylan Dennis Pritchard; four sisters Rose Golliday (best friend), Theresa Yurche, Joan Studzinski and Lee Kriete; a special friend Brother Lloyd Stalcup (brother in the Lord); many nieces and nephews.
Preceding him in death besides his parents was a son Robb Marzullo; grandson Jason Roe; sister’s Ann Quintana, Rita Rampmeyer, Concetta Gavigan; brother Vincent Marzullo, Jr.
A funeral service will be held Friday, August 16, 2013 beginning 1 p.m. at Jesus Church, 416 Pleasant Street, Cambridge. Family will receive friends one hour prior to the service. Officiating will be Pastor Abe Lankford. Interment will follow at Dorchester Memorial Park, Cambridge.
Serving as pallbearers will be Wayne Schmidt, Joey Yurche, Mike Yurche, Wayne Zopp, Ricky Gavigan and Michael Gavigan Sr.
In lieu of flowers, memorial contributions may be made to the Newcomb and Collins Funeral Home, P.A., 308 High Street, Cambridge, MD 21613 to help defray the funeral cost.
To send online condolences, please visit www.newcombcollins.com.


To order memorial trees or send flowers to the family in memory of John Marzullo, please visit our flower store.