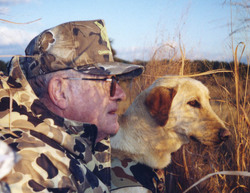 Captain Kenneth Scott “Scotty” Hughes, Sr., 71, of Madison, passed away peacefully, Wednesday, September 5, 2012 at Chesapeake Woods Center, Cambridge, MD.
Born on March 24, 1941 in Cambridge, MD, he was the son of Edith Keyes Riggins and the late Kenneth Sherwood Hughes.
He was raised on Elliott Island and was a 1959 graduate of Cambridge High School. He attended college at Colorado A & M University in Durango, CO. before enlisting in the U.S. Army in 1960. He served his country as an Army Ranger, 101st Airborne Division stationed in Cambodia and Laos, where he was a paratrooper, trained sniper and weapons expert. Upon his discharge, he returned to Cambridge where he was employed in various vocations. Most recently, he served as a licensed charter boat captain and property manager for Woolford Creek Farm in Madison and Glen Eagle Lodge in Bozman, MD. He was an avid outdoor sportsman, enjoying hunting and fishing. He was a charter member of the Grand National Waterfowl Association and Ocean City Marlin Club. Scotty enjoyed his second home in Ocean City and spending time with his family, many friends and his beloved yellow lab, Sunny.
Scotty is survived by his wife, Janice Webster Hughes, whom he married April 29, 1967; his daughter, Shelly Hughes Jones and her husband, Gordy E. (Jody) Jones, Jr., of Church Creek and a son, K. Scott Hughes, Jr., of Cambridge; three grandchildren, Justin C. Wheatley and his wife Jessica of Cambridge, S. Patrick Hughes of Cambridge and Anna J. (Janna) Jones of Church Creek; two great grandchildren, Ethan Hughes and Kherington Wheatley. In addition to his mother, he is also survived by a sister, Ellen Hughes Borga and stepmother Ruth Ann Hughes of Anderson, SC; an uncle, Howard Keyes of Cornersville and many cousins and treasured friends.
In addition to his father, he is preceded in death by his stepfather, Rubin S. “Big John” Riggins and stepson Dale B. Wheatley; his mother and father in law, Raymond “Steve” and Audrey Lee Webster.
Scotty’s family wishes to acknowledge and thank the staff and administration of Chesapeake Woods Center for their exceptional care and compassion during this difficult time.
A Celebration of Life Service will be held Friday, September 21, 2012 beginning 11 a.m. at Countryside Christian Church, Austin Road, Cambridge. Officiating will be Evangelist John McArthur with Bill George assisting.
In lieu of flowers, memorial contributions may be made in memory of Scotty to Chesapeake Woods Resident Activities Fund, c/o Nicole Douglas, 525 Glenburn Ave., Cambridge, MD 21613 or Baywater Animal Rescue, 4930 Bucktown Rd., Cambridge, MD 21613
Arrangements are entrusted to Newcomb and Collins Funeral Home, P.A., 308 High Street, Cambridge, MD
To send online condolences, please visit www.newcombcollins.com

To order memorial trees or send flowers to the family in memory of K. Hughes, Sr, please visit our flower store.
Send a Sympathy Card