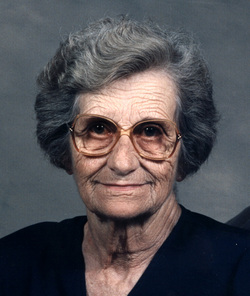 Born August 26, 1928 in Andrews, Dorchester County, MD, she was the daughter of the late Washington Gore and Daisy Hughes Gore. Kitty attended schools in the South Dorchester area.

Kitty worked as a seamstress for Rob Roy for several years.

Kitty was one of the founding members of Linkwood-Salem Volunteer Fire Department. She was a life long member and very active member.

Her hobbies included quilting, seamstress work and ceramics. She and her husband had owned and operated J&K Ceramic Shop in Linkwood.

Preceding her in death besides her parents was a brother Emmit Gore.

A memorial service will be held Sunday, August 2nd at 2:00 p.m. at Curran-Bromwell Funeral Home, P.A., 308 High St., Cambridge, MD where the family will receive friends one hour prior to the service. Officiating at the service will be Lay Leader Cathi Bisker, family friend and fellow fire department member.

Inurnment will be private.

In lieu of flowers, memorial offerings may be made in Mrs. Smith’s memory to the Linkwood-Salem Volunteer Fire Company, PO Box 66, Linkwood, MD 21835.


Memorial Donations Memorial donations can be made to:

To order memorial trees or send flowers to the family in memory of Katherine Smith, please visit our flower store.
Send a Sympathy Card