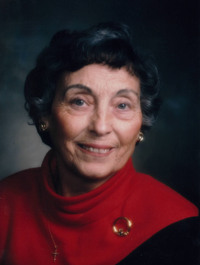 Born on December 6, 1920 in Cardiff, Wales, she was the daughter of the late William McClammy and Isabel Pilar McClammy.

Kitty had worked at Airpax Corporation and later at Western Publishing in Cambridge from 1960-1986. In her later years, she did private home health care.

Kitty was a communicant of St. Mary, Refuge of Sinners Catholic Church. She was one of the founders of the St. Mary’s Society and could always be counted on to assist the annual bazaars and dinners.

Her hobbies included sewing, crocheting, reading and watching movies. Kitty was always delighted to be with family, friends and particularly her grandchildren and great-grandchildren.

The family will receive friends Thursday evening, January 29th from 7 to 9 p.m. at Curran-Bromwell Funeral Home, P.A. A Mass of Christian Burial will be held on Friday, January 30th at 11:00 a.m. at St. Mary, Refuge of Sinners Catholic Church, Glasgow St. and Hambrooks Blvd., Cambridge. Burial will follow at the Eastern Shore Veterans Cemetery, Hurlock, MD.

To order memorial trees or send flowers to the family in memory of KITTY FITZHUGH, please visit our flower store.
Send a Sympathy Card