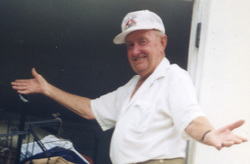 
Lehman Lewis Adams, 88, of Fishing Creek died Saturday evening, January 30, 2016 at Mallard Bay Care Center with his loving family by his side.
Born on April 5, 1927 in Fishing Creek, he was a son of the late Capt. Winfield (Winnie) Adams and Eliza Lewis Adams.
Lehman attended school in Hoopers Island and graduated from Hoopers Island High School with the class of 1944.
He then served his country by enlisting in the U.S. Navy during W.W.II and was assigned to the Floating Dry Dock U.S.S. A.B.S.D. #1 in the Philippines and South Pacific with rank of Seaman 1st Class. After his honorable discharge from the Navy, Lehman returned home and went back to being a waterman and as a seafood buyer with his brother William operating Adams Seafood. He had a great love of his country and was adamant to keep his American flag flying at his home on the island.
On May 7, 1949 Lehman married Helen Mae Tolley she died December 11, 1956. On February 14, 1976 he married Cecilia Willey and they were weeks shy of celebrating their 40th anniversary. Together they operated Willey’s Seafood.
Lehman was one of the first Founding Fathers of the Hoopers Island Vol. Fire Co. in which he held many offices. He was a member of the VFW Post #7460, American Legion Post #91, past member of the Cambridge Moose Lodge #1211 and St Mary Star of the Sea Catholic Church, Golden Hill where he served as usher and shared many dear friendships.
Lehman touched the hearts and lives of everyone he met. Anyone who knew him would immediately pick up on his wonderful sense of humor. Lehman was a very kind- hearted and gentle soul. Many of his friends would boast Lehman as “the kindest man they ever met” and “they don’t come any better” He loved family gatherings especially taking them out on his boat the “Lucky Lady”.
He will be greatly missed by his family and many friends.
Surviving him is his wife Cecilia, sons Kevin Willey (Debbie) of Cambridge, Donnie Willey of Hoopers Island; daughter Dawn Townsend (Troy) of East New Market ; daughter-in-law Joyce Willey of Cambridge; grandchildren Robbie Willey, Jr. (Nicole), Chris Willey(Kelly), Lanai Etchison (Adam), Carrie Rose (Lee), Cory Willey (Jessie), Jake & Josh Townsend; great-grandson Hunter Rose and great-granddaughters Marissa Willey and Juliana Willey; several nieces and nephews; his pet “Buddy” and a life-long friend Samuel “Tolley” Yates.
Preceding him in death besides his parents and first wife was a son Robert Howard Willey, Sr.; brothers William and Harold Adams and a great-nephew Steve Simmons.
A Mass of Christian Burial will be held on Friday, February 5, 2016 beginning 11 a.m. at St. Mary Star of the Sea Catholic Church, Golden Hill, Maryland with Celebrant Bruce Byrolly officiating. Interment will follow in the church cemetery with military honors. Family will receive friends an hour prior to the service.
Serving as pallbearers will be Lehman’s grandchildren.
Honorary pallbearers will be Raymond Simmons, Jr., Dave Nickerson and Jimmy Simmons.
In lieu of flowers donations in Lehman’s name can be made to St. Mary Star of the Sea Foundation, P.O. Box 187, Fishing Creek, MD 21634 or Hoopers Island Volunteer Fire Company c/o Rosemary Dean, P.O. Box 125, Fishing Creek, MD 21634.
Arrangements entrusted to Newcomb and Collins Funeral Home, P.A., Cambridge, MD
To share online condolences with the family, please visit www.newcombcollins.com