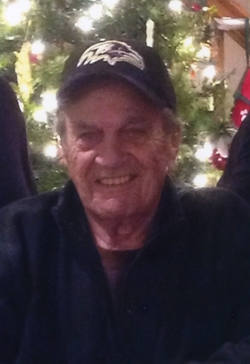 
Leon Shockley, 78, of Cambridge, Maryland passed away Tuesday, May 19, 2015 at his home with his family by his side.
Born in Fishing Creek on August 1, 1936 he was a son of the late Ruby Creighton and Everette Shockley.
As a young man, Leon started making a living working the waters of the Honga River as a waterman. Crabbing and fishing was not considered a job to him, it was an everyday enjoyment. Leon was very talented with his hands, an excellent carpenter and was well known for his boat models. He was an avid Orioles fan and loved going to his grandson Tyler’s baseball games. When Leon would hear the word “Auction” you had better clear the way because he would surely be on his way.
On September 26, 1997, Leon married the former Sharon Aaron and together they enjoyed going on camping trips. His beloved wife died on September 29, 2014. After the passing of Sharon, his family made sure he was well taken care of and he would always joke and say, “If the kids invite me to dinner, I’m going”.
Surviving him are his children Melody Adkins (Gary) of Cambridge, Kathy Swann (Dickie) of East New Market, Laura Velasquez (Lino) of Secretary and Leon V. Shockley (Allison) of Salisbury; grandchildren Brad Adkins (Jessica), Amie Foxwell (Rob), Zach Swann, Gabrielle Swann, Spencer Davidson, Olivia Davidson and Tyler Shockley; great grandchildren Preston and Paxton Adkins; brother Dorsey Shockley; several nieces and nephews and his beloved dog Taylor.
Preceding him in death besides his parents and wife was brothers Rodger, Carl and Charles Shockley; sisters Laura Shockley and Doris Aaron.
A funeral service will be held Friday, May 22, 2015 beginning 11 a.m. at Newcomb and Collins Funeral Home, P.A., Cambridge with Pastor Jack Diehl officiating. Interment will follow in the Hosier Cemetery, Fishing Creek, Maryland. Family will receive friends the hour prior to service.
Serving as pallbearers will be Brad Adkins, Zach Swann, Spencer Davidson, Tyler Shockley, Rob Foxwell, Jimmy Simmons, LeRoy Bell and Jessie (Bunky) Dean.
In lieu of flowers memorial contributions in memory of Leon can be sent to Baywater Animal Rescue, 4930 Bucktown Road, Cambridge, MD 21613 or Coastal Hospice Foundation, P.O. Box 1733, Salisbury, MD 21802.
To share memories and send online condolences to the family, please visit www.newcombcollins.com

To order memorial trees or send flowers to the family in memory of Leon Shockley, please visit our flower store.
Send a Sympathy Card