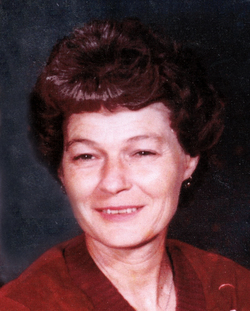 Born on May 10, 1932 at Hills Point, Cambridge, MD she was the daughter of the late Luther M. James and Mary Irene Marshall James.

Mrs. Hurley was a graduate of Cambridge High School, Class of 1949.

Mrs. Hurley had worked for Sears Roebuck in Salisbury.

Jerri, as she was known, loved her family and being with her friends. She liked reading and had enjoyed many hours fishing and crabbing with her husband.

Jerri was a member of the American Legion Post #91 and the Cambridge Moose Lodge # 1211.

Preceding her in death besides her parents and husband was her son Billy E. McGlaughlin, Jr. and her granddaughter Wendy Irene Floyd.

Funeral services will be held at 1:00 p.m. on Thursday, April 1st at Curran-Bromwell Funeral Home, P.A., where the family will receive friends one hour prior to the service. Officiating at the service will be The Rev. Jack M. Mason, Rector of St. Paul’s Episcopal Church, Vienna. Burial will follow in East New Market Cemetery.

To order memorial trees or send flowers to the family in memory of Lillian Hurley, please visit our flower store.
Send a Sympathy Card