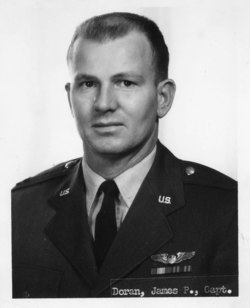 Born April 30, 1932 in Merced, CA, he was the son of the late Elmer E. and Mabel Oliver Doran.
James attended local schools and after graduating he enrolled in college. In 1955 he joined the United States Air Force and served his country for 20 yrs. retiring as Lieutenant Colonel. He also fought in the Vietnam War.

On May 23, 1959, James married the former Bernette Snider and together raised two sons.

A funeral service will be held on Friday, October 5, 2012 beginning 1 p.m. at Newcomb and Collins Funeral Home, P.A., Cambridge, MD, with full Military Honors. Family will receive friends one hour prior to the service. Officiating will be Rev David J. Wooten Jr. Burial will be private.
In lieu of flowers memorial contributions in memory of James may be made to the Talbot Hospice Foundation, 586 Cynwood Drive, Easton, MD 21601.

To order memorial trees or send flowers to the family in memory of Lt. Doran, please visit our flower store.