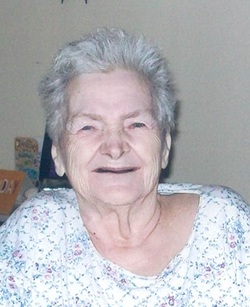 
Marie Esther McGrath, 83, of Cambridge, passed away July 11, 2012 at Coastal Hospice at the Lake in Salisbury, Md.

Born January 16, 1929 in Trappe, Md., she was the daughter of the late William and Alice Trice.
On August 10, 1951 Marie was married to George Washington McGrath and together raised six children. Mr. McGrath died January 3, 1979.

For many years Marie was a member of St Paul's United Methodist Church where she had all her children baptized. She later attended and became a member of the Salvation Army Church.
Marie enjoyed needlepoint and crafting. Lately her favorite pass time was watching the many deer that would travel through her yard. She worked at Dorset Laundry but mainly was a homemaker.

Preceding Marie in death besides her parents and husband was a daughter Naomi Arliss; two sisters, Mildred and Margaret; three brothers, Paul, Albert and Roland.

Funeral Services will be held on Monday, July 16, 2012 beginning 11:30 a.m. at the Newcomb and Collins Funeral Home, P.A., Cambridge. Family will receive friends one hour prior to the service. Officiating will be Rev. Doug Ridley. Interment will follow at the Maryland Veterans Cemetery, Hurlock, Md.

In lieu of flowers, contributions in memory of Marie can be made to Coastal Hospice, 2604 Ocean City Road, Salisbury, MD. 21804.


To order memorial trees or send flowers to the family in memory of Marie McGrath, please visit our flower store.
Send a Sympathy Card