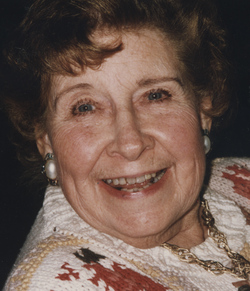 Born on September 21, 1919 in Glen Ellen, Illinois, she was the daughter of the late George Duquette and Margaret Eileen Sheehan Duquette.

Mrs. Benjamin was a graduate of Boonton High School, Class of 1937, Boonton, NJ.

Mr. Benjamin served in the U.S. Army during World War II. During his time overseas Mrs. Benjamin worked at a Munitions Plant in Boonton, NJ and was also a candy striper. She and her husband moved to Florida after the war for a short period of time then made their home at Cooks Point, Dorchester County, MD. In the late 1950’s Mrs. Benjamin became an Avon representative; she was also a promoter and eventually manager for Colony Bowling Lanes in Cambridge.

Mrs. Benjamin received her degree as an LPN (licensed practical nurse) at age 62 from the Eastern Shore State Hospital School of Nursing. Mrs. Benjamin worked there for ten years, then was a private home health care nurse and worked at Glasgow Nursing Home. She was always willing to give care and aid to anyone in need. Her affection for people and animals was apparent to all who knew and loved her.

Mrs. Benjamin, or “Gum-Gum” as she was affectionately known, held great pride and love for her family. She founded Cub Scout Troop #406 and was den mother for many years.

A devoted member of Spedden United Methodist Church, she was active in the Women’s Prayer Group and the Disciples Group.

The family will receive friends Thursday evening, Nov. 5th at Curran-Bromwell Funeral Home, P.A. from 5:00 to 7:00 p.m. Graveside services will be held at 11:00 a.m. on Friday, Nov. 6th at Dorchester Memorial Park. A memorial service will be held at 1:00 p.m. the same day at Spedden United Methodist Church where a reception will immediately follow at the church. Officiating will be The Rev. Pam Bockart, Pastor of the Choptank Charge.

To order memorial trees or send flowers to the family in memory of Marna Benjamin, please visit our flower store.