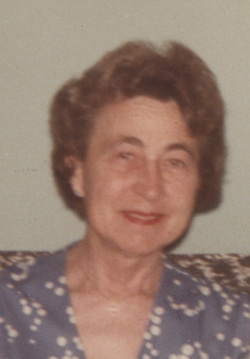 Born on November 20, 1923 in Madison, MD, she was the daughter of the late Ira Dail Sanders and Louise Bromwell Sanders.

Mrs. Evans was educated in Dorchester county schools and was a graduate of Cambridge High School, Class of 1941.

Mrs. Evans worked for the Selective Service Commission during World War II for three years. Her entire working career was as a legal secretary having been employed mostly by Harrington and Merryweather Law Firm for several years.

Her greatest enjoyment was being with her son, sisters and her sisters’ families. She also greatly treasured her times spent with friends.

Preceding her in death and sorely missed besides her parents and husband were her five sisters Addie White, Irene North and her husband Perry, Caroline Howard and her husband G. Edwin Howard, Sr., Mary Sanders, Mabel Sanders; and niece-in-law Laura B. Howard.

Family will receive friends Wednesday, July 8th from 5:30 – 8:00 p.m. at Curran-Bromwell Funeral Home, P.A. Gravesides services will be held at 11:00 a.m. on Thursday, July 9th at Cambridge Cemetery. Officiating at the service will be The Rev. Robert Kirkley.

To order memorial trees or send flowers to the family in memory of Martha Evans, please visit our flower store.
Send a Sympathy Card