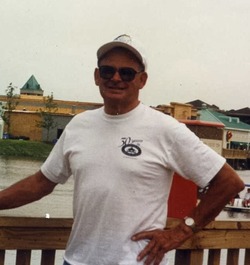 Born in Easton on September 19, 1933, he was a son of the late Olin Oscar and Ethel Mullikin Daffin.

He attended the local schools and graduated from Easton High School with the class of 1952 where he lettered in baseball. Maurice then went on to serve his country in the U.S. Army from 1953 to 1955 with duty assignment in the 144th Ord Company (Ammo).

After his honorable discharge from the Army, Maurice married the former Carol Ann Cannon on December 1, 1956. They were married in Grace United Methodist Church by Rev. Richard C. Hubbard. They would have celebrated 60 years of marriage.

Maurice loved the carpentry trade and was considered one of the best carpenters around. He had worked for various construction companies including Choptank Construction Company during which time he was involved with building a major addition onto the LeCompte Funeral Home, the present Newcomb and Collins Funeral Home. He also was employed by the Henry Knott Co. as a Licensed Home Improvement Contractor. Later he became self-employed and Maurice and his wife completed many projects for satisfied customers in the area.

As a child growing up in Tunis Mills, he was a member of the All Faith Episcopal Church built by the family in the Talbot County community. He also was a communicant of Christ Episcopal Church in Cambridge, member of American Legion Post #91 and past member of the Cambridge Elks. He had a lifelong love of the water, instilled by his childhood spent on Leeds Creek and the Miles River with special memories of going out on “The Magic” log canoe. He also enjoyed sports and coached the American Legion Little League baseball team and the All Stars to victory on several occasions in the 1960’s. Maurice loved his family and will be missed by all.

Surviving him is his wife Carol Ann; a daughter Donna Abbott of Berlin, MD; grandson Ryan Abbott and his wife Melissa, along with their children Miles and Hazel all of Annapolis, MD; sister Ellen Callahan of Salisbury, MD; a brother Gene Daffin and his wife Sharon of Trappe, MD; brother-in-law Ralph Brown; several nieces and nephews.

Preceding him in death besides his parents was a sister Betty Daffin Brown.

A funeral service will be held on Friday, October 28, 2016 beginning 10:30 a.m. at the All Faith Chapel, 26281 Tunis Mills Road, Easton, MD 21601 with The Rev. Cannon Patrick A. Collins officiating. Interment will follow at Maryland Eastern Shore Veterans Cemetery, Hurlock, MD with military honors. Family will receive friends at the Chapel from 10- 10:30 a.m.

In lieu of flowers, contributions in Maurice’s name can be sent to Talbot Hospice, 586 Cynwood Drive, Easton, MD 21601.

To order memorial trees or send flowers to the family in memory of Maurice Daffin, please visit our flower store.
Send a Sympathy Card