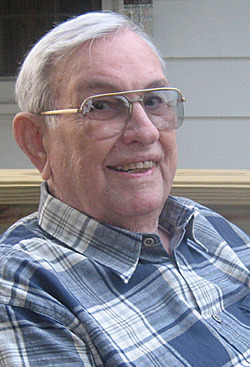 Born on June 6, 1924 in Cambridge, MD, he was the eldest son of the late Roland Eldridge Trego and Mildred Colbourn Trego.

Mr. Trego graduated from Cambridge High School in 1942. He served his country during World War II in the U.S. Army Air Force as a navigational radar mechanic, 8th Air Force, 388th Bombardment Group, 563d Squadron, which flew B-17 missions out of Knettishall, England.

On November 11, 1944 he married the former Thelma Jones. They were happily married for over 64 years, until Mrs. Trego’s death last year, February 6, 2009. Mr. Trego retired as a District Manager with the Choptank Electric Cooperative after 34 years of employment with the company.

He was a kind and good man who touched all with his big smile and friendly personality. He loved people and for years enjoyed hosting parties with his wife, Thelma, inviting family, friends, and neighbors. He led a joyful and active life that included a job he loved, fishing, boating, volunteer work, worship and travel. Though he would always say “My home is my castle,” he never missed the chance to take a road trip across country to visit with family—he loved to be behind the wheel of a vehicle. He was a devoted family man who made his daughter and grandchildren a big part of his life.

Mr. Trego was a member, since 1959, of St. Paul’s United Methodist Church in Cambridge. He served on several committees throughout the church and served a term as president of United Methodist men, an organization he continued to meet with until a short time ago. After his retirement, he volunteered at the Dorchester General Hospital for over ten years.

In addition to his parents and his beloved wife, he was preceded in death by a brother William Trego; three sisters-in-law Betty Moxey Trego, Nancy Medford Trego and Avalon Jones Todd; and a brother-in-law Leroy Todd.

Burial will follow at the Eastern Shore Veterans Cemetery in Hurlock, MD with Military Honors.

To order memorial trees or send flowers to the family in memory of Melvin Trego, please visit our flower store.
Send a Sympathy Card